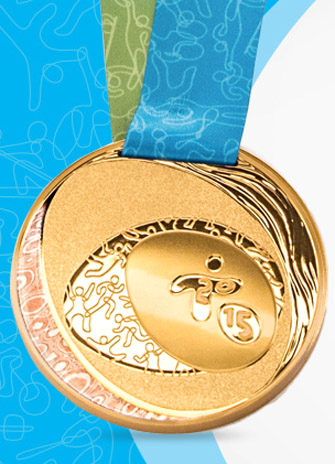 The Toronto 2015 Pam Am Games wrapped up on Sunday after two weeks of exciting competition and York University students and alumni finished the event with five medals.

Current Lions track & field student-athlete Khamica Bingham capped the excitement at the CIBC Athletics Stadium on York University’s Keele campus by anchoring the 4 by 100-metre relay team that won the bronze medal on Saturday night. Bingham is a third-year humanities student in the Faculty of Liberal Arts & Professional Studies and has represented the Lions for the past two seasons, winning a total of four gold medals at the Ontario University Athletics (OUA) championships and five at the Canadian Interuniversity Sport (CIS) championships while also setting a new national mark in the 60-metre this past February at 7.19 seconds.

Bingham also reached the final of the 100-metres last week, the only Canadian woman to do so. She finished in sixth place in a personal-best time of 11.13 seconds.

Former Lions women’s hockey player Autumn Mills took her athletic talents to the baseball diamond and helped Canada win the silver medal in the sport’s first ever appearance at the Pan Am Games. She pitched the semifinal game against Venezuela on Saturday – a four-hit gem en route to a 6-1 victory – and was also the started in a round-robin game against the same team earlier in the competition. She previously played for the Lions for five seasons from 2006-11.

Other former student-athletes who represented Canada at the games included volleyball player Melissa Humana-Paredes and track & field athlete Dontae Richards-Kwok. Humana-Paredes just missed out on a medal with a fourth-place finish in the beach volleyball competition alongside partner Taylor Pischke, and Richards-Kwok helped Canada advance to the final of the men’s 4 by 100-metre relay by running the third leg in the semifinals.

The biggest splash made by a York student came in the boxing ring, where psychology major Arthur Biyarslanov won the gold medal in the light welterweight division with a split-decision victory over Cuba’s Yasnier Toledo in the final. The gold medal represented Canada’s first in men’s boxing at the Pan Am Games since 1975.

The two other medals were won by third-year humanities student Katrina Cameron, who claimed a pair of bronze medals in rhythmic gymnastics in the group ribbon and group clubs/hoops events.

Rounding out the York student involvement in the Games was Kailah Macri, a recent kinesiology and health science graduate, who finished fourth in roller figure skating.