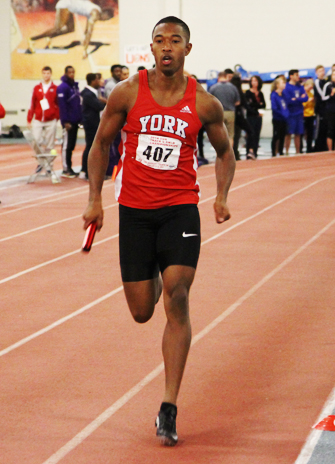 York history alumna Aisan Fazeli (BA ’14), a former member of the Lions women’s rugby team at York, sat down with Richards-Kwok to find out more about his interests, his background in athletics and what inspires him.

Dontae Richards-Kwok, a recent York University Faculty of Health grad, is the most decorated track and field athlete at York and one of the most successful student-athletes in Lions history. In his illustrious five-year career, he won 14 Canadian Interuniversity Sport (CIS) medals and 16 Ontario University Athletics (OUA) medals, and he was twice named the CIS Championship’s most outstanding performer, as well as being named the OUA track event’s most valuable performer and York’s male athlete of the year – all in 2012 and 2014.

Why and when did you start your sport, and did you always want to pursue it?

I actually didn’t care much for track when I was younger. When you’re a kid, you race your friends around the playground and you have track and field day. I used to always win, but I didn’t really think anything of it. I really loved playing basketball a lot more all through high school, and I got into track a little more seriously around Grade 11. An assistant coach at my high school really pushed me to pursue athletics. At that point, I had won OFSAA [Ontario Federation of School Athletic Associations] in Grade 9 and 10, but still hadn’t started training. So with a little encouragement from my coach, I decided to join a club and start training.

Free time is pretty sparse in my life, but when I do get some I usually spend it catching up with friends at home. I keep myself solely dedicated to track when it’s in-season, so when off-season comes I spend a lot of time playing other sports. I love playing basketball and soccer, so in my free time you’ll see me anywhere but the track.

What are some of your athletic aspirations?

Athletically, I think I’ve done a lot of things on my “to-do list” and I’m grateful for the opportunities I have had. One of the big things left is to make the Olympic team in 2016. The Olympics is the biggest stage for a track and field athlete to compete on, so I’ve got to stay focused the next couple years and get myself there. Of course, being from Toronto, the Pan Am Games are going to be huge for me. I want to represent the country and myself at these two events and win more medals of course.

I think it’s going to be amazing. Toronto is constantly boasted as being the best city in the world. We have an amazing city with so much diversity, so it’s about time we take on something this big. Being from Toronto, with the potential to represent my home, makes it that much more special. As an athlete, no matter what sport, your whole life is travelling and living out of a suitcase. You’re always going somewhere else and having to prove to the people there how great you are. The worst part is your family has to wake up at different hours of the night to watch you compete or they’re at work and they miss it. One of the best things about having the Pan Am Games at home is that we’re at home, we’re comfortable and we have our fans right there as we compete – we finally get the home-court advantage.

My grandma is definitely my number one inspiration. She’s my daily reminder to keep working hard. She always tells me I can overcome any obstacles, no matter what, it’s all about being patient. Athletically, I think there are pieces of other athletes that are inspirational to me – the adversity others have gone through or their journeys to becoming professional athletes or world champions.