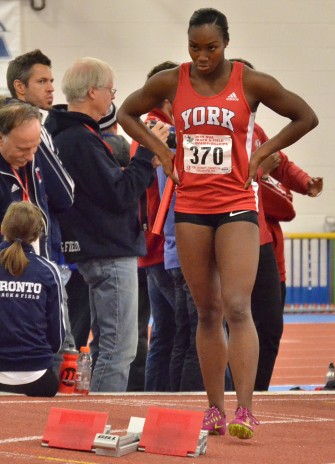 The Toronto 2015 Pan American/Parapan American Games are right around the corner. It has been a generation since Canadian summer sport athletes have had the opportunity to compete on home soil before supportive crowds at an event of this magnitude. At least four York University student-athletes are now fighting for their chance to shine this summer as they strive to earn a spot on the national team.

Over the next month, YFile will publish Q&As of the following York University hopefuls – Melissa Humana-Paredes, a beach volleyball player, sprinters Khamica Bingham and Dontae Richards-Kwok and thrower Brittany Crew. Watch for these York student-athletes as they strive for the opportunity to compete for Canada in front of the nation, as friends and family cheer on.

York history alumna Aisan Fazeli (BA ’14), a former member of the Lions women’s rugby team at York, sat down with Bingham to find out more about what motivates this Brampton, Ont., track & field (sprints) athlete and her many accomplishments.

Bingham of the Department of Humanities in the Faculty of Liberal Arts & Professional Studies began her Canadian Interuniversity Sport (CIS) career before coming to York University. She won the Ontario University Athletics (OUA) 60m title in record-breaking time and added the CIS gold. In her first year at York, she made one of the most impressive York Lions debuts in the 2013-14 season, winning nearly every race she entered en route to being named the OUA female athlete of the year. She was also a nominee for the BLG Award, given to the CIS athlete of the year. In that first season with the Lions, Bingham won three gold medals at the CIS championships and two at the OUA championships, earning CIS all-Canadian and OUA all-star honours. She was named the OUA track events most valuable performer and the CIS championship most outstanding performer. She was named York’s female athlete of the year at the conclusion of the season.

She also had a successful 2014-15 season, winning the gold medal in the 60m at the OUA and CIS championships, where she ran a blazing-fast 7.19 seconds, the second fastest time in Canadian history. She also won gold at both meets in the 4x200m relays, and earned first-team OUA and CIS all-Canadian honours.

Bingham has already made a name for herself on the international stage. In 2014, she finished in seventh place in the 100m at the Commonwealth Games at the age of 20. She was the youngest Canadian female to reach the 100m final at the multi-sport event. Bingham also holds the Canadian youth record in the 100m. She competed at the senior world championships in Russia as a teenager in 2013, running the anchor leg on the 4x100m relay team that broke the Canadian record and placed sixth overall.

What are you taking at York and why?

I’m studying communications but currently taking a combination of business and writing courses because it’s been what is the easiest to manage with my busy schedule since I’m preparing for the Pan Am Games and World Championships this year. Once I graduate from York University, I’m looking to gear towards a career path of either public relations or media journalism. I love free writing, telling stories and always thought that media journalism would be the perfect job for me one day.

Why and when did you start your sport/did you always want to pursue it?

Before I became a sprinter, my dream was to always be an Olympian, but five years ago the dream was in the sport of gymnastics. I was a national gymnast and, unfortunately, my parents struggled financially for years to keep me in the sport. So in the summer of 2010, I had to walk away from that dream. Luckily, a teammate of mine talked to me periodically about how amazing track was and all the interesting places she had travelled to. Conveniently, my dad always wanted me to try track and field as well, since I would always run faster than all the kids in my school! Therefore, I gave sprinting a try in September of 2010. Within my first year of getting used to a new sport, new techniques and a new world, I won double gold at the 2010 OFSAA championships in the 100m and 200m and that’s when a new dream came alive.

What are some of your aspirations athletically?

How do you feel about the Pan Am’s being hosted in Toronto and what does that mean to you?

Competing for Canada is an indescribable feeling and I absolutely love it! The fact that I get to compete on Canadian soil is absolutely perfect. I get to have my friends and family right there supporting me as we get the home-field advantage. I can’t wait to have my name announced at the games and hear the roaring cheers of the crowd. It means the world to me to make my country proud and to put on a great show as I bring home medals!

My biggest inspiration has always been my dad, Carl Bingham. From the time I was young, my father was the biggest supporter in everything I did. When I was six and in skating, my dad put an ice rink in the backyard so my sister and I could practice. When I was nine and started gymnastics, my dad was the one who taught me back-handsprings on his bed. And now that I’m in track, my parents are both there watching all my meets! My dad has always been the little coach in my head, he is the reason I am an elite athlete. I am living the dream we both had for myself and I’m so blessed to have him in my life.