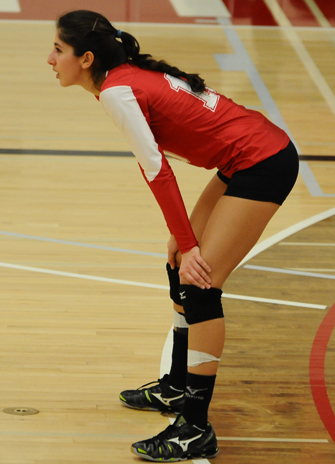 York history alumna Aisan Fazeli (BA ’14), a former member of the Lions women’s rugby team at York, sat down with Humana-Paredes to find out more about her accomplishments and what motivates her.

Melissa Humana-Paredes was born into a family of volleyball players and has continued the tradition by excelling in the sport herself. In her four years with the Lions women’s volleyball team, she was a three-time Ontario University Athletics (OUA) all-star and a Canadian Interuniversity Sport (CIS) all-Canadian, and she helped the program win the OUA silver medal in 2013.

Internationally, Humana-Paredes has become one of the best young beach volleyball players in the world. She and her partner, Taylor Pischke, have together won back-to-back bronze medals at the U23 World Championships, competed at the International University Sports Federation (FISU) Games in 2013, and toured around the world to compete at the International Volleyball Federation (FIVB) and The North, Central America and Caribbean Volleyball Confederation (NORCECA) events, winning numerous medals in the process. Humana-Paredes was even named FIVB rookie of the year in 2014.

What are some of your academic aspirations?

All throughout my years as a varsity athlete, I strived to be an academic all-Canadian. I succeeded in my first, third and fourth years. But, mostly, I would love to graduate on the Dean’s Honour Roll. I think it’s extremely important to have aspirations beyond my sport because one day I will no longer be able to compete. I want to have a solid academic foundation for my future.

Why and when did you start your sport, and did you always want to pursue it?

I was exposed to the sport at a young age because my dad was a beach volleyball coach (for Olympic bronze medallists John Child and Mark Heese). It always appealed to me – how could it not? It’s on beautiful beaches, music is always playing, it’s a fun environment. I started playing beach volleyball when I was 12 and started representing Canada was I was 16 years old. I dabbled in other sports when I was younger but nothing really stuck. Beach volleyball was my first love.

As a student-athlete, I don’t really have a lot of free time, so I try to spend what little free time I have wisely – naturally, I sit in my bed and binge-watch TV shows. My current favourites are “Game of Thrones,” “Suits,” “The Mindy Project” and “Modern Family,” and my all-time favourite is “Friends.” I’m partly kidding. I like to hang out with my friends, family and my golden retriever as much as possible because I know when I start travelling I will rarely see them. I also like reading books – my latest read was Mindy Kaling’s book and it was hilarious!

It’s incredible that Canada gets to host such an amazing event, but to have it in Toronto makes it even sweeter. Being able to represent your country on home soil is indescribable. I am working to represent Canada at the 2015 Pan Am Games and the 2016 Olympics in Rio. It’s always such an honour to represent Canada and wear the maple leaf. Knowing that my family and friends will be able to support me and see all the work I’ve put in is one thing, but knowing that my country is cheering me on and supporting my team is humbling. I know the Games are going to electrify the city this summer and whether or not I’m competing in them, I’m still so excited to see the city light up with amazing athletic talent.

My parents are my greatest inspirations. They’ve sacrificed and done so much to get me where I am. I don’t know where I would be without them. As an athlete, Muhammad Ali is my inspiration for many reasons beyond his athletic ability – for his passion, humour, intelligence and determination.