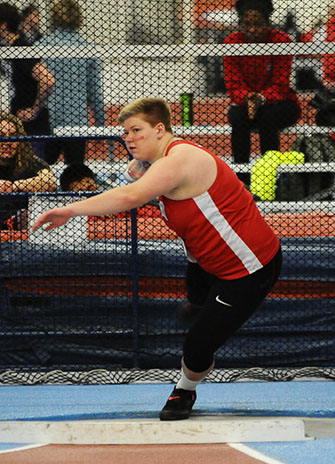 York history alumna Aisan Fazeli (BA ’14), a former member of the Lions women’s rugby team at York, sat down with Crew to find out more about her accomplishments and what motivates her.

After one season at Eastern Michigan University, Faculty of Health student Brittany Crew completed her first season with the York Lions in 2013-14 and made an immediate splash in the Canadian Interuniversity Sport (CIS) league. She won the Ontario University Athletics (OUA) gold medal in the shot put and set a new meet record. Crew went on to capture the CIS silver medal in the shot put and earn CIS all-Canadian and OUA all-star honours for her performances. She was even better in her second season with the Lions, sweeping the throwing events at the OUA and CIS championships, making for one of the best throwing seasons ever. She won the most valuable performer awards at the OUA and CIS field events, was a first-team OUA all-star and CIS all-Canadian, and capped her year by being named York’s female athlete of the year.

In 2014, Crew represented Canada at the North America, Central America and Caribbean (NACAC) U23 Championships, winning a pair of bronze medals in the shot put and discus events. She also competed in the shot put at the 2012 world junior championships in Barcelona.

What are you studying at York and why?

I am currently working towards an honours bachelor of science degree in kinesiology. I am looking to get into chiropractor college after graduation and pursue that as a career. I hope to own my own practice one day.

When and why did you start your sport, and did you always want to pursue it?

It was in Grade 10, when I won OFSAA [Ontario Federation of School Athletic Associations] in shot put and came second in discus, that I got really hooked in the sport. When I made my first national team and travelled to Barcelona for the World Junior Championships, I really started to take it seriously. By Grade 12 I was completely hooked. Not many people know this, but I hated the sport at first. When looking at female body image, it was really hard to take up such a male-dominated sport. I truly love it now because it has opened so many doors for me and I can see my true potential. My ultimate goal now is to make the Olympic team; it’s been my dream since I was eight years old.

I really enjoy writing music and playing guitar in my free time. When I can, I love going to open mic nights and doing karaoke. As a student-athlete, free time is rare and I wish I had more time for this hobby of mine.

I’m very excited about the fact that Pan Am Games are being hosted in Toronto! It would mean the world to me to be able to compete in front of my hometown. My mom does not have money to travel to international competitions, so it would be a very special memory to have my mom in the stands watching me compete for my country.

My biggest inspiration to pursue and continue my sport comes from my mother. I love having her come support me at my events and making her proud. When I was growing up, my mom hardly ever missed a soccer game and was always at my track meets cheering me on.