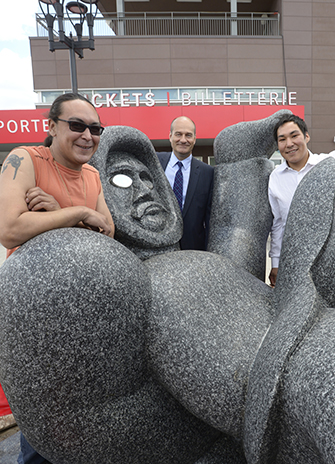 Over the course of a year, a carefully crafted symbol of inclusion, diversity and Inuit art and culture emerged from thousands of pounds of stone as a monumental sculpture that now has a permanent home at the entrance of York Lions Stadium.

The sculpture of the Inuk soccer player, embellished with silver-hued eyes and a bronze walrus skull for a ball, was unveiled at York University on June 21, National Aboriginal Day in Canada.

The soccer player, which was carved out of a 26-tonne granite rock by Inuit artists Ruben Komangapik and Koomuatuk (Kuzy) Curley, is poised in an Alaskan high-kick position. It will serve as inspiration to athletes and spectators who attend the North American Indigenous Games at York University next summer and to countless visitors to campus for generations.

Iqaluit, Nunavut-based Mathew Nuqingaq opened the event with a traditional drumming performance. The event was attended by York U community members, government officials and other special guests including Josh Stribbel of Torontomiutaujugut, a newly formed Toronto based Inuit youth organization.

As a red sheet was ceremoniously removed from the sculpture to unveil Ahqahizu, guests, onlookers and supporters clapped with enthusiasm.

“It is wonderful to have the opportunity, on National Aboriginal Day, to celebrate Indigenous and Inuit culture in two such visible and powerful ways on our campus: by honoring Jeannette Corbiere Lavell with an honorary degree, and by unveiling this remarkable Inuit sculpture,” said Mamdouh Shoukri, president and vice-chancellor, York University, who earlier in the day presented Lavell, an Indigenous and women’s rights activist, with an honorary doctorate of laws. “In a multicultural city such as Toronto, this sculpture will create opportunities for dialogue about Inuit art and culture – and we at York are delighted to be part of this important conversation.”

The artists were commissioned to create the sculpture as part of Mobilizing Inuit Cultural Heritage (MICH), a multi-media, multi-platform collaborative research and creation project supported by the Social Sciences & Humanities Research Council of Canada (SSHRC.)

Supporting the artists were a team of assistants and apprentices, including visual art students from York’s the School of the Arts, Media, Performance & Design (AMPD) and youth residents from the Jane Finch community.

Project lead Professor Anna Hudson in the Department of Visual Art and Art History said working with the artists over this past year on the creation of Ahqahizu has been a deep intercultural learning opportunity.

“It has opened our campus to increased Indigenization of university education,” she said.

The artists also took the podium to share a few words and thoughts on their experience, and said the sculpture represents the shared work between them and York University to help Indigenize the campus.

Stribbel also spoke to the crowd, and defined the moment as a “dawn of a new era” for Toronto’s Indigenous people, and said Ahqahizu is a “symbol of strength for our people in this city.”

A highlight of the event was a performance by Inuk musician Susan Aglukark, who received the prestigious Governor General’s Performing Arts Award just over a week ago. Aglukark told the crowd that the song she selected for this ceremony shares the message of “I am no longer afraid” and reflects on the decision to “just be in the roles that were meant to be”.

Following the performance, guests were invited to enjoy Inuit traditional food and meet the artists.

“I’m very proud that York University was able to play a role in supporting this project,” said Shoukri.