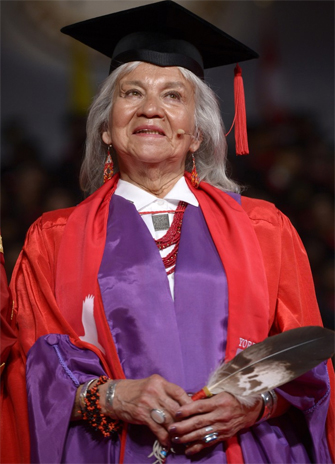 On a day that recognizes the contributions to Canada by Indigenous people, the second cohort of graduands from the Faculty of Liberal Arts and Professional Studies (LA&PS) heard inspirational messages of creativity, love and personal growth from Jeannette Corbiere Lavell, an activist for Indigenous and women’s rights.

Corbiere Lavell, an Anishnawbe community worker who was given an honourary doctorate of laws by York University, shared her insights – as well as her birthday, and the summer solstice – with graduating students and guests.

“It is an honour to be here today, on the traditional territory of the Mississagas of New Credit First Nation,” she said, noting her Anishnawbe name is Keewednanung or ‘North Star’.

For Indigenous people, June 21 is significant because of the summer solstice, she said. It’s a day that marks a very spiritual time for Indigenous people – a specific day set aside for thanksgiving, for ceremony and cultural events.

“My hope is to leave you with a story, a few teachings, and my sincerest hope is for you all to realize your greatness. It is not in some of us, it is in all of us,” she said.

She shared a story from her childhood – one that incited both laughter and admiration – about how she used creative thinking to arrive at a solution to a rather endearing problem.

She recalled a specific trip to her Auntie Tootween’s farm on Cape Smith – these were the days, she reminded graduands, of the horse and buggy, no electricity, no TVs and no Facebook – where her auntie lived in a whitewashed log house with fruit trees and apple orchards surrounding it.

In the orchard, her auntie had selected the “biggest, reddest and most beautiful apple” to submit to the fall fair in hopes of first place – a red ribbon and a cash prize – and had warned everyone not to pick this apple.

The morning of the fair, her auntie discovered the apple still hanging from the branch, but only the core was left. The temptation of walking by this big, red, perfect apple was too much for Corbiere Lavell, a girl of five or six.

But she wasn’t reprimanded – instead her auntie laughed and praised Corbiere Lavell for her ingenuity.

“Still laughing, she managed to say ‘Jeannette didn’t disobey. She didn’t pick the apple, it is still hanging on the tree. This little girl has found a way to get what she wanted, she is learning’,” recalled Corbiere Lavell.

“So, what will you take from this story?” she asked. “There will be hurdles and obstacles on your way towards your life’s goals. One goal can have many paths. If one path doesn’t work then find another.”

Her next story reflected on the theme of love and war, and spoke to her commitment to Indigenous rights.

In 1970, Corbiere Lavell married David Lavell, a non-Indigenous man, and because of their union she was stripped of her Indian status. Not long after their marriage, she challenged the law in Canada that removed her rights – the Indian Act – and though her suit lost, she remained committed to the cause and was the force behind the passing of BillC31, which reinstated the status of First Nations women and children.

In 1985, Bill C31 was passed, and the government removed this section of the Indian Act based on its discrimination against First Nations women and children, reinstating Indian status for hundreds of thousand native families.

“I encourage you all to love and fight for love for as it is an important part of life,” she said.

In concluding her address, Corbiere Lavell offered a gift to graduates from her ancestors.

“My people have a teaching that when a young man becomes a man, or a young woman becomes a woman, they must process these certain qualities. These are humility, honesty, respect, courage, wisdom, truth, and love,” she said. “Together, as Canadians, all of us here, and as Indigenous people, living on this beautiful land given to us by the Creator, we all can make a difference and create a better life for all.”