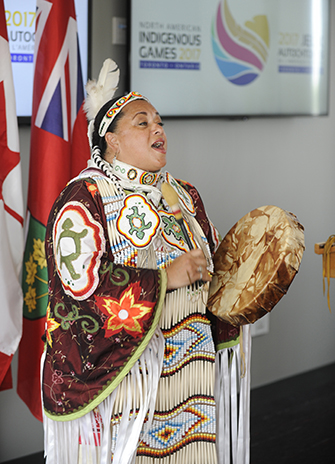 This will be the first time the games take place in Ontario, since beginning in 1990, and the majority of sports will be hosted at the York Lions Stadium, formerly the Toronto 2015 CIBC Pan Am/Parapan Am Stadium. As well, many of the participating athletes will be housed at York University.

The NAIG Host Society announced on May 26 that provincial and federal funding commitments of a combined $7 million will support the historic event. The Government of Canada, through Sport Canada, will fund $3.5 million to support the hosting of the games through its Hosting Program. The Government of Ontario has provided matching funds of $3.5 million and – through the Ministry of Tourism, Culture & Sport, and the Ministry of Aboriginal Affairs – has committed to support the execution of the event.

Officials and dignitaries, along with NAIG athletes and traditional Indigenous performers, gathered at York Lions Stadium for the announcement, and acknowledged the location as traditional territories of the Mississaugas of New Credit First Nation.

Among those in attendance were York University President and Vice-Chancellor Mamdouh Shoukri; Federal Minister of Sport & Persons with Disabilities Carla Qualtrough; Provincial Minister of Minister of Tourism, Culture & Sport Micheal Coteau; and Rob Lackie, operations manager of the 2017 NAIG.

“York University is proud to host Toronto’s first North American Indigenous Games at our new, state-of-the-art York Lions Stadium,” said Shoukri. “We are very pleased to be able to provide North America’s top Indigenous athletes with a grand stage on which to perform in the games. Events such as NAIG are a valued part of our cultural identity, and as such we look forward to welcoming 2017 NAIG athletes, volunteers and spectators to the University for this historic event.”

Traditional grandmother Kim Wheatley offered a song and a prayer during the announcement, and her daughter Alexandria Bipatnath performed a traditional dance.

The 2017 games will welcome more than 5,000 participants, 2,000 volunteers and a number of other spectators and dignitaries from across North America. A total of 14 sports will be offered for competition during the event and a week-long cultural village will be housed at York University, featuring nightly programming including traditional teachings, dancers and other performers.

Other venues for sport and cultural activities include Humber College, University of Toronto Scarborough, City of Toronto facilities and venues in Six Nations of the Grand River.

“I’m so pleased to see the 2017 NAIG coming to Toronto next year, as we know this event will have a significant and long-lasting impact on Canada’s Indigenous athletes, coaches, officials and sport leaders, while also building bridges with non-Indigenous Canadians who share the same love of sport,” said Qualtrough. “We acknowledge the Call to Action of the Truth & Reconciliation Commission of Canada, which highlights the NAIG as a key way to promote sport development and recreation among Indigenous Canadians. Sport and recreation activities have tremendous benefits both on and off the field of play, and we are committed to supporting these games and other initiatives that contribute to the well-being and quality of life of Indigenous people from coast to coast to coast.”