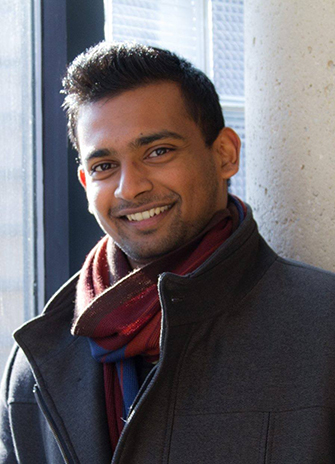 The award is the highest honour given to a graduating undergradate student at York, and recognizes both academic distinction and notable contributions to campus life. The award will be presented to Ariyarathnam during spring convocation ceremonies.

“This award is the perfect way to end my undergraduate degree at York,” said Ariyarathnam. “It’s a true honour and privilege to be the recipient of the Murray G. Ross Award.”

He is the recipient of numerous awards, including the prestigious York University President’s Scholarship (which he received every year since 2012), and the Faculty of Liberal Arts & Professional Studies (LA&PS) Dean’s Award for Academic Excellence. More recently, Ariyarathnam earned the Robert Tiffin Award for Student Leadership, and this past fall was selected as the winner for the York University President for a Day contest.

“The multitude of my experiences at York crafted a version of myself unimaginable to me in my first year,” he said. “The leadership and international opportunities have made my undergraduate experience invaluable.”

Ariyarathnam wasted no time getting acquainted with extra-curricular activities on campus, and in his first year became involved in campus groups including Student Council of Liberal Arts & Professional Studies; the U of Mosaic Fellowship Program; York University Senate and more. The list of his participation on campus and in student life is lengthy, and to him, extremely fulfilling.

He’s also proud, and grateful, for the international opportunities York has offered him – through various affiliations he’s travelled to China, Japan, and this summer will set off to Vietnam.

“Cultivating my education, various facets within the university, particularly my mentors, encouraged my growth,” he said.

Ariyarathnam will graduate in the spring, but returns in the fall to start on his next academic path: a JD/MBA at Osgoode Hall Law School.

“I am proud to be returning to York in September to be on campus for another four years,” he said.

Supporting his nomination for the award was Livy Visano, LA&PS professor and undergraduate program director. In his letter, he states “I am proud to note that I rank Mr. Ariyarathnam easily among the top two per cent of all students that I have taught (undergraduate and graduate) over my 30 years of teaching and three different universities. He is without exception, among the most industrious and most professional students I have ever met.”

Visano speaks highly of Ariyarathnam’s advising and mentoring of other students, praising him for his level of modesty and integrity, and calls him “one of the most respected student leaders at York University”.

Ariyarathnam said he finds genuine gratification in mentoring other students, and spends his free time doing just that in his own community as well.

“My down time consists of tutoring high school students and playing the mirudangam, a South Indian percussion instrument,” he said. “Witnessing the proverbial light bulb light up in a student’s eyes when they understand content is one of the most rewarding experiences. I love what I do.”

Ariyarathnam said after completing his JD/MBA, he hopes to pursue a career in corporate and international law, possibly working alongside an NGO down the line. Over the long term, he sees a return to academia, and perhaps a PhD and he hopes a future as a professor in law.

The Murray G. Ross Award was established by the student council in 1962 in honour of York University’s first president. It is presented annually to a graduating student for scholarship and outstanding contributions to undergraduate student life.

As the recipient of this prestigious award, Ariyarathnam will receive a medal at his convocation ceremony and a notation on his transcript.