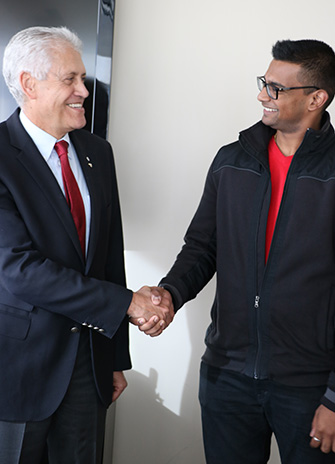 Experiential learning was the order of the day Sept. 29, for York University President and Vice-Chancellor Mamdouh Shoukri and Sayjon Ariyarathnam, a fourth-year honours student who is pursuing a double major in Criminology and Human Rights & Equity Studies.

Ariyarathnam, the winner of the fourth President for a Day contest, is a Student Senator and president of the Student Council of Liberal Arts and Professional Studies (SCOLAPS). His co-curricular involvement in the University involves work with the Student Senator Caucus and other professional organizations.

To apply for the contest, students were asked to submit an application that addressed the question, “if you were appointed President of York University, what would be your top three priorities that would directly impact students?”

Ariyarathnam’s entry expressed the need to promote and develop experiential education opportunities for students, to ensure that students are aware of University policies and procedures that are in place to support them academically, and to increase communication between community members by creating an intermediary page through MyFile to relay crucial information.

As President for a Day, Ariyarathnam exchanged roles with Shoukri and for a full day he oversaw the management of York University and attended the president’s meetings and engagements.

Meanwhile, as Student for a Day, Shoukri shouldered a backpack – and all the roles and responsibilities of a student. He attended Ariyarathnam’s classes, tutorials and extracurricular activities, which included a body building session in the Tait McKenzie Centre.

The duo met up on Oct. 1 for a breakfast meeting to debrief. A refreshed and relaxed Shoukri teased Ariyarathnam, noting he looked a bit tired. “I am a bit tired this morning,” said Ariyarathnam, “how was your day as a student?”

Shoukri said he found the experience of being a student to be thoroughly enjoyable, making special note of the lecture he attended for the course “Crime and the Corporation” taught by Professor Myles Wieselman.

“I may have interrupted the professor,” he said with a grin. “I enjoyed participating in the discussion because I got involved big time! I don’t think he minded because I brought my experience from my role in industry and as an academic to the discussion.”

Shoukri noted that he found the discussion so engrossing that he did not look at his cellphone or check email for the duration of the lecture. “He started the class with the situation that Volkswagen is in and went through the newspapers, so he was clearly engaged in bringing recent events to the course content.”

As part of his day as a student, Shoukri filed documents as a work-study at Osgoode Hall Law School. “The office gave me some filing to do, which you [pointing at Ariyarathnam] will probably have to do all over again because I think I did it wrong,” he chuckled.

Shoukri also met with the SCOLAPS executive and a group of students from Osgoode Hall Law School. “Your colleagues in SCOLAPS are wonderful and very enthusiastic,” noted Shoukri. “Alamgir Khandawala just loves you. Dalubuhle Ndlovu and Maria-Palma Zito were fantastic; I was very impressed by all of them.”

He finished his day with a vigorous workout at the Tait McKenzie Athletic Centre. “I have a problem with my knee, so the trainer helped me by showing how to carefully build the load on my knee, and I have to say that this is the first day that my knee has not bothered me,” he said.

For his part, Ariyarathnam said he found the pace of the University president’s day to be hectic. “In my involvement with academic governance, I know that decisions are not made on the fly; there are meetings, consultations and committees. One thing I noted was the important role that your staff, in particular your executive assistant Irene [Fezza], play and how crucial that is. You have meetings back to back all day and Ijade Maxwell-Rodrigues [chief of staff] and Irene provide you with briefing notes and keep you on schedule. If it weren’t for them, I don’t think I would have kept up,” he said. “One thing I admire about Irene is her professionalism in interrupting you to keep you on schedule!”

Ariyarathnam met with the University vice-presidents, the provost and vice-provost students and the chief marketing and communications officer “I marvel at the fact that you, as the president, have such an attention to detail. You have to know all the particulars, understand the ramifications of every decision and how it impacts the University,” he noted.

“How were your meetings with the vice-presidents?” asked Shoukri.

“I found the meetings very interesting,” said Ariyarathnam. “It was incredibly thought-provoking to speak with Vice-President of Finance and Administration Gary Brewer. We talked about the university initiatives such as the Integrated Institutional Resource Plan and the new budget model and he gave me the rationale behind it.

“With the provost, we had a terrific conversation about the importance of experiential education,” he said. “My meeting with the vice-provost students covered my level of involvement in extracurricular activities at the University and she [Janet Morrison] was very interested in how I approached getting involved in clubs, Senate and student government.”

As part of his day, Ariyarathnam met with the other applicants for President for a Day and discussed how they could, as a group, further a culture of involvement among the University’s students.

“It was an enriching day, but I’m glad to get back to being a student,” he noted with a grin.

For more information, visit York University’s President for a Day website. York U community members can view both presidents’ tweets by searching the hashtag #YUPres4aDay on Twitter.