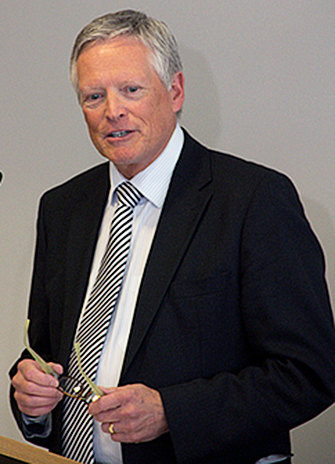 This award was created to recognize current undergraduate and graduate students whose leadership has contributed to the growth, development and vitality of York University. Students were selected on the basis of their leadership and/or involvement, as well as outstanding academic achievement.

This year’s recipients are:

Robert Tiffin, the award’s namesake, served as York University’s vice president, Students, for nine years before retiring in 2012.  Tiffin was in attendance to hand out the awards to each of the winners.

“I am always impressed by the diversity of ways in which leadership occurs here at York and this was truly evident in the variety of ways you have contributed,” he said. “In fact, you embody the key themes of a York education: mobilizing new ways of thinking, preparing engaged global citizens and building stronger communities.”

Through his strong leadership, dedication, integrity and fairness, Tiffin transformed his operation into one of the most professional student service organizations in the country while serving one of Canada’s largest student populations. During his term as vice-president, he undertook the strategic expansion of student services and the development of strategic programs such as Research At York (RAY) and Leadershape, which focus on enhancing the student educational and co-curricular experience.

Since retiring from York, Tiffin has built upon his years of experience through consulting engagements in the post-secondary and private sector. He has continued his commitment to community building by serving as president of the Tamara Gordon Foundation, which financially supports post-secondary students with physical disabilities. He also serves as a member of the Board of Directors for the Niagara Health System.

The celebration was hosted by Vice-Provost, Students Janet Morrison, and was attended by Peter Avery, associate dean Students, of the Faculty of Liberal Arts & Professional Studies; Barbara Crow, dean of the Faculty of Graduate Studies; Donald Ipperciel, principal of Glendon College; and Janusz Kozinski, dean of the Lassonde School of Engineering; as well as members of the selection committee.

The recipients received a certificate at the reception and will have the award noted on their transcripts. Their names will also be added to the awards display wall in the Vari Hall Rotunda.