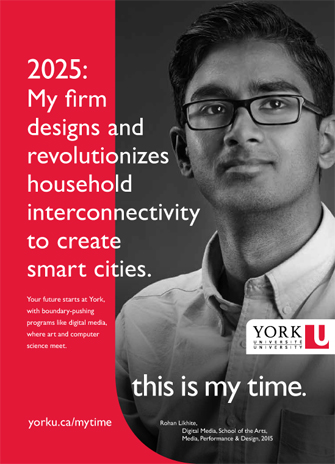 From inventing smart city technologies and electric powered commercial planes that can cross the Atlantic, to designing new molecules to target and repair genes and creating ground breaking cognitive behavioural therapies, the visions provided by students in the 2014-15 “this is my time” brand campaign provide insight into the power and potential of a York University degree.

Rohan Likhite has a vision that by 2025: “My firm designs and revolutionizes household interconnectivity to create smart cities.” Likhite, a student in the Digital Media Program is a member of a new cohort of students contributing their inspirational visions for how they will positively impact the world in York University’s award-winning “this is my time” campaign.

“The objective of the campaign is to enhance the University’s reputation so that York U is top of mind as a first choice for applicants. As well, when York U extends an offer to a future student, they will accept that offer,” says Susan Webb, chief communications and marketing officer at York University. “Additionally, we want to leverage the campaign to continue to build pride on York U’s campuses.”

This week, the campaign rolls out in its full form with a comprehensive and noticeable presence. The most visible components will appear in two new inspirational cinema spots that will air ahead of blockbuster movies screening this fall and winter. In addition, fans of critically acclaimed television shows such as “Grey’s Anatomy” and “Scandal”, and viewers of newly released programs like “Gotham”, will see York University’s inspiring “this is my time” commercial.

”Television is a high impact and high reach vehicle which will serve to grab attention and create that emotional connection that research shows makes our campaign successful,” says Webb.

As with previous years, York U ads will also be present in digital media, transit shelters and other key media.

Added to the voices of students in the campaign are some of the University’s most accomplished grads who, through their York U education have realized their own visions. Alumni participating in this year’s campaign are: Bill Bannerman, the co-producer of The Twilight Saga movies; the Emmy award winning choreographer Debra Brown; internationally acclaimed Canadian author, Joseph Boyden, winner of a prestigious Giller Prize; Toronto Star political columnist and CBC’s The National contributor Chantal Hébert; Jennifer Keesmatt, the chief planner for the City of Toronto; and Layth Gafoor, the principal and managing director of Lucentem Sports & Entertainment Law.

Read more about these inspiring alumni by visiting the Alumni visions section on the “this is my time” website.

Research intensive professors who have helped inspire students and grads include York University Faculty of Health Professor and vision scientist Laurence Harris and Faculty of Science Professor and cancer scientist Chun Peng. Harris and Peng join the growing contingent of accomplished professors in the campaign. Read more about how these professors and others inspire York U students by visiting the Faculty visions section on the “this is my time” website.

Returning for another year is the highly popular free tuition contest where both future students and current students can win free tuition for a year and other prizes. Last year, more than 5,000 York U current students entered their visions and the winner, Luke Durward, a student in the Kinesiology and Health Science Program, was surprised in one of his classes by the York President and Vice-Chancellor Mamdouh Shoukri, who personally awarded the tuition prize to Durward. His winning vision was “2023: As CEO of a fitness and nutrition company, I make Canada the leader in reversing the growing number of obesity and type 2 diabetes cases”, which he says was inspired by his younger brother.

The “this is my time” campaign offers a gateway for future students to learn more about the University, its students, faculty and alumni, the promise of its academic programs, and life on campus. It also offers an invitation to students and their families to visit the University and tour its facilities.

“The microsite is the destination for all of our advertising with compelling stats, videos, and key messages of why York U is a great place to get your degree so I encourage all York faculty and staff to check out yorku.ca/mytime,” adds Webb.

To learn more about the campaign and the inspiring visions of York University’s students, faculty and grads, visit “this is my time.”