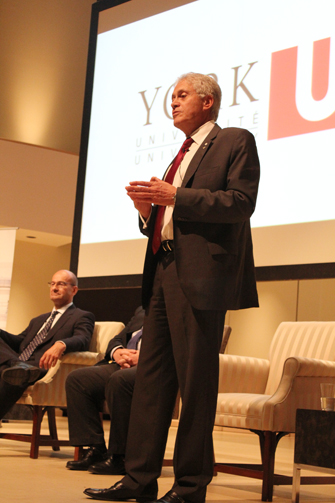 During his annual town hall on Tuesday, President and Vice-Chancellor Mamdouh Shoukri delivered an insider’s guide to York University’s proposal for a new campus in York Region.

Speaking to a near capacity crowd in the Tribute Communities Recital Hall on the Keele campus, Shoukri delivered a comprehensive overview about why a new campus situated in Markham, Ont., would benefit the York Region and the University.

So why is York University pursuing a new campus in York Region?

In December 2013, the Ministry of Training, Colleges and Universities (MTCU) issued a Policy Framework on Capacity Expansion, which was followed by an opportunity for Ontario postsecondary institutions to submit proposals for establishing new campuses or expanding existing campuses.

“We have a good plan and it is a blueprint of what we want to do as a University,” said Shoukri, “which means we are better positioned to seize such opportunities.”

Recognizing the enormous potential presented by the MTCU, the University put together a team of experts to compile a notice of intent for a York in York Region campus. York U invited municipalities in York Region to propose a location and how they would partner with the University. From these submissions, the City of Markham was selected as the University’s preferred municipality. A bid for a new campus involving York Region, the City of Markham, Seneca College and other partners will be submitted to the MTCU on Sept. 26. The proposal has received 30 letters of endorsement from area chambers of commerce, area hospitals, area businesses and community associations.

“We expect to have cabinet’s decision by the early spring,” said Shoukri.

“I believe this proposal has tremendous advantages because it is more comprehensive and more community engaged,” said Shoukri, noting that what distinguishes the York in York Region proposal is that it aligns with the province’s aim to reach under served student markets. The campus would be situated in an area experiencing huge growth and would not be located close to any existing university campus.

Located between Kennedy Road and Warden Avenue just north of Highway 407 and south of Highway 7, the new campus will be situated in the heart of Markham Centre, a new commercial and residential development currently under construction. Last week during a special event near the proposed site, the City of Markham announced that it would provide the University with five acres of land for the campus. At the same event, York Region announced that it would contribute $25 million towards the campus.

The location, said Shoukri, couldn’t be better because it is adjacent to the new Markham Pan Am Centre, a new YMCA, City of Markham playing fields, a new Cineplex Odeon Theatre Complex and transportation hubs that will connect GO Transit with municipal transit.

“Our hands are not tied,” said Shoukri. “The land assigned for this campus is our land.”

The site could accommodate four buildings and parking for 1000 vehicles to start. The initial student population would grow from 1,000 to 5,000 within five years of opening with potential to grow to 20,000 students in 20 years.

The proposed campus, said Shoukri, would be a centerpiece for technology-enhanced learning, experiential education and pedagogical innovation. The range of programs being considered for the new campus includes those in the life sciences, design, business, information technology, education and the liberal arts. The campus would also be home to joint York-Seneca programs. Some 25 undergraduate degree programs in eight fields of study would be offered at the new “all-honours” campus. Also offered would be a set of highly focused graduate programs, research with entrepreneurial outcomes and a focus on professionally relevant programs.

Following his 29-minute presentation, Shoukri was joined by senior vice-presidents for an informal Q&A. Questions were received from the audience, as well as through Twitter and e-mail.

A question submitted via Twitter asked about the campus amenities and student space. York Vice-President Finance and Administration Gary Brewer replied that the proposal pays “great attention to library space and will offer a student experience that is second to none.”

The manner in which the services would be provided would differ from the normal operational model, said Brewer, in that the campus location means the University would leverage already existing facilities such as the Pan Am Centre, the Cineplex Odeon theatre and other amenities allowing the University to focus on student space.

Brewer highlighted that the University would also strive for a minimum of LEED Silver certification with aspirations to LEED Gold for the new campus.

Brewer was asked about the existing state of the Keele and Glendon campuses. He outlined that the University had invested some $60 million since 2007 into deferred maintenance and had embarked on a $40 million energy management plan. Some $70 million was being invested into renewing residences and Brewer said he was hopeful for more funds because the recent provincial budget had recognized that new sources of funding were needed for existing infrastructure repair and renewal.

In response to a question about services related to safety, Brewer noted that all of the existing safety services would be a part of the new campus.

In closing, an audience member asked the panel: “What can we do as employees and students to help advance this cause?” In response, Shoukri urged everyone to visit the Yes to York website and talk to colleagues and friends and urge elected officials to accept York University’s proposal.