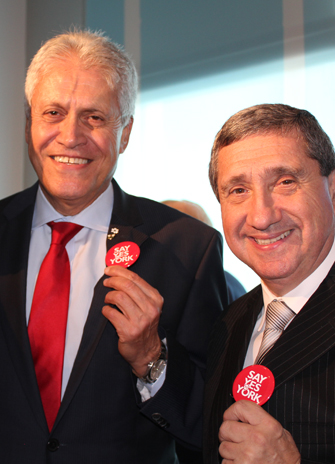 The bid for a York University campus in York Region took a major step forward on Thursday, Sept. 11 with the official announcement of the proposed campus location north of Highway 407 between Kennedy Road and Warden Avenue, in the City of Markham, along with significant commitments from both The Regional Municipality of York and the City of Markham.

York University is now finalizing the proposal to be submitted by September 26 to the Ontario government which is seeking to increase student capacity.  York Region is one of the fast-growing major urban areas in Canada.

“Together with Seneca College, the City of Markham and York Region, we are delighted to be making this official announcement about the site of the proposed York University campus in York Region,” said York University President and Vice-Chancellor, Mamdouh Shoukri. “In situating the campus in the heart of a vibrant new urban centre, our aim is to offer programs that will be responsive to the needs of York Region while furthering the University’s objective of becoming more comprehensive by growing in professionally relevant disciplinary programs and enhancing our research and innovation activities. York University has always been York Region’s university,” continued Shoukri. “We are very excited about this opportunity in Markham Centre.”

If approved, the new York University campus will play an important role in advancing York Region as an innovative knowledge hub, building on its existing partnerships in the area.

“York Regional Council’s approval of up to $25 million to the York in York proposal is a collective investment in our people, the economy and the future,” said York Region Chairman and CEO Bill Fisch. “The Regional Municipality of York continues to make significant investments to ensure our confederation of communities remain strong. Enhancing the post-secondary and research presence in York Region has long been identified as an important strategic priority and we are pleased to partner with York University and the City of Markham in making this a reality.”

The location was specifically selected with the needs of students in mind.

“The City of Markham is excited to have a partnership with York University, Canada’s third largest university.  This is a game changer in terms of the benefits it will bring to York Region and the City of Markham.  Markham Centre will have a distinctly urban character with a world class university, entertainment facilities, sports fields, and amenities such as the YMCA and the Markham Pan Am Centre,” said Mayor Frank Scarpitti of the City of Markham.

Students at the new campus will have access to a broad range of innovative undergraduate programs. In addition, students will have the ability to participate in real-life learning experiences in the workplace and laboratory, including placements with employers, research opportunities that connect students with outstanding faculty and innovative organizations, and opportunities for business incubation and entrepreneurship.

“We are delighted to be working with our long-term partners York University, York Region and the City of Markham to meet the ever-growing demand for postsecondary education with a new York University campus in Markham,” said David Agnew, President of Seneca College. “Our academic partnership with York University brings together our strengths to provide exciting new academic options and opportunities for students.”

Once bids are submitted to the Province, a multi-ministry panel will review the applications and make final recommendations to Cabinet through the Ontario Ministry of Training, Colleges and Universities. Cabinet will make the final decision about successful proposals with a decision expected in early 2015.

York University students, faculty and staff and residents of The Regional Municipality of York and the City of Markham learn about the proposal and can ask politicians to support the new campus through the Yes to York website.