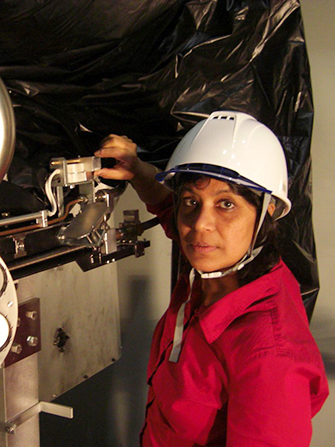 The international T2K (Tokai to Kamioka) experiment, which includes Physics Professor Sampa Bhadra in the Faculty of Science, has reported new findings that bring scientists one step closer to understanding one of science’s greatest mysteries: why there is more matter than antimatter in the universe.

During the Big Bang, antimatter and matter were created in equal amounts. Although matter and antimatter annihilate when they come into contact with one another, today our universe exists as matter—meaning matter must have won over antimatter somehow. Physicists have struggled to understand how this happened.

T2K is an experiment aimed at unraveling this conundrum by studying neutrinos. Neutrinos are subatomic particles that were produced in huge numbers immediately after the Big Bang and are created continuously within stars and the Earth and its atmosphere; they can also be produced in particle accelerators by scientists. They come in three different identities (electron-, muon- and tau-neutrinos), and each has a corresponding antimatter counterpart antineutrino. The T2K experiment was the first to observe muon-neutrinos morphing into electron-neutrinos—a discovery that won the T2K team, including Bhadra and her graduate students Elder Pinzon and Mark McCarthy, the 2016 Breakthrough Prize for Fundamental Physics.

The team recently shed light on the matter-antimatter puzzle by further studying the morphing rates of neutrinos versus antineutrinos. At the International Conference on High Energy Physics in Chicago in August, the team announced that it had found hints that neutrinos morph more often than antineutrinos, indicating for the first time an imbalance between the two types of particles. More research is required to confirm the results, however.

“The results, while not statistically definitive yet, are very exciting for neutrino researchers,” says Bhadra. “We are continuing to collect more data and plan for upgrades to our beams and detectors.”

Bhadra is the project lead of T2K’s Optical Transition Radiation beam monitor, which was designed, built and commissioned with collaborators from the University of Toronto and TRIUMF, Canada’s national particle physics laboratory. In addition to Bhadra, Pinzon and McCarthy, the T2K team at York University also includes graduate student Mitchell Yu and post-doc Arturo Fiorentini.