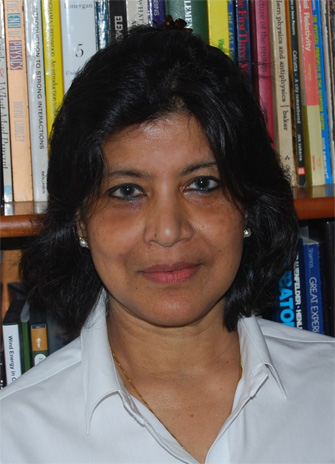 York University physics Professor Sampa Bhadra is on the Tokai to Kamioka (T2K) team that received the 2016 Breakthrough Prize in Fundamental Physics on Sunday evening. The prize is for the “fundamental discovery of neutrino oscillations, revealing a new frontier beyond, and possibly far beyond, the standard model of particle physics.”

The $3 million prize for T2K is jointly shared with the KEK to Kamioka (K2K) collaboration, along with four other international experimental collaborations –Superkamiokande (Super-K), Kamland, Sudbury Neutrino Observatory (SNO) and Daya Bay.

“We had the opportunity to join an experiment that had the potential to measure this last unmeasured quantity related to neutrino oscillations,” said Bhadra. “We wanted to be a part of this, but also wanted to contribute in a meaningful way so that our students and postdocs were visible for the right reasons in such large collaborations.”

York, the University of Toronto and TRIUMF, Canada’s national particle physics lab, proposed and built the optical transition radiation monitor that accurately measured the position of the proton beam which produced the neutrinos.

“Without this critical device, the groundbreaking physics results from T2K would have larger associated uncertainties, making it less meaningful,” said Bhadra.

Neutrinos are the most abundant massive particles in the universe, arising as a product of the Big Bang, and continuously appear from processes such as fusion in the sun and interactions of cosmic rays in the atmosphere. Neutrinos can also be created at accelerators for a more controlled study. In the T2K project, muon-neutrinos are created at the JPARC proton accelerator in Tokai, Japan, and sent 300 kilometres to the Superkamiokande detector in Kamioka. The change in the identity (oscillations) of muon-neutrinos to electron-neutrinos during flight was observed for the first time by T2K. This ultimately led to the measurement of the last unknown quantity dictating the rules for oscillations. The T2K research team has extended its reach by studying not only matter (muon-neutrinos) but also antimatter (anti-muon neutrinos) to determine whether they exhibit the same transformational properties. If not, the new behaviour could be unlocking information on how the universe as we know it came to be. “We are looking for differences that will hopefully shed light on how matter won out over anti-matter shortly after the Big Bang, making our very existence possible,” Bhadra said.

The optical transition radiation monitor was highly successful, in part due to the work of present and former York University students Brian Kirby, Vyacheslav Galymov, Elder Pinzon, Mitchell Yu and Mark McCarthy, and postdocs Arturo Fiorentini and Mark Hartz (jointly with the University of Toronto and now a professor at the University of Tokyo, IPMU and TRIUMF ). Many of them contributed not only to the hardware but also the analysis that led to the breakthrough results.
Founded by Russian entrepreneur, venture capitalist and physicist Yuri Milner, the Breakthrough Prize in Fundamental Physics recognizes individuals who have made profound contributions to human knowledge. It is open to all physicists — theoretical, mathematical and experimental — working on the deepest mysteries of the universe. The prize is one of three awarded by the Breakthrough Foundation for “outstanding contributions in life sciences, fundamental physics and mathematics.”

The award was presented at a ceremony at the NASA Ames Research Centre in California, hosted by American television personality Seth MacFarlane. It was broadcast live in the U.S. on the National Geographic Channel. A one-hour version of the broadcast is scheduled to air on Fox on Nov. 29 at 7pm.