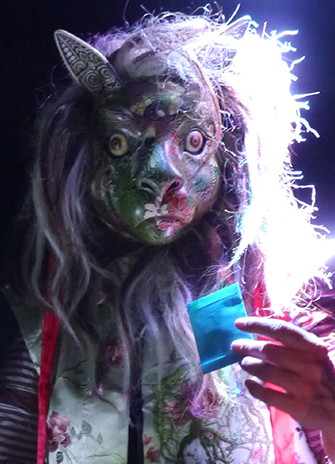 Burnish, an interactive performance installation, first earned praise during its premiere in May 2015 as a collateral event at the 56th International Venice Biennale art exhibition and later that month at Toronto’s Theatre Centre.

Audience members invited inside will choose elements for her performance, which integrates music, digital technology, poetic text, art objects and singing. Batdorf will be attached to physiological and emotive sensors that affect the sound and lighting.

“The work is being built on campus as we speak, and will be featured in Toronto’s SummerWorks Festival in early August,” said Hosale, who also said the team will execute run-throughs and work out technical details on campus this week.

Production, he said, has involved a custom tent of his own design with fabrication of the fabric cover by York lecturer Sylvia Defend. According to Hosale, Defend also had several York theatre students involved with the build

The installation will run from Aug. 4 to 9, with performances beginning Aug. 5. For more information about the piece, visit summerworks.ca/2016/artists/burnish.