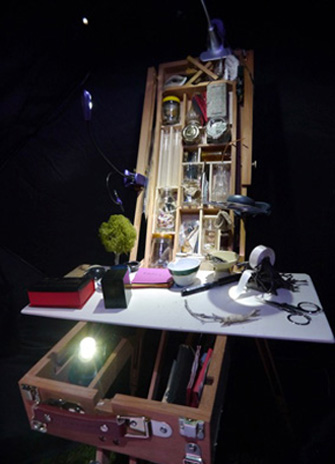 York University theatre Professor Erika Batdorf describes her latest creation, Burnish, as a live, abstract jukebox. Poetry, installation, singing, sculpture and performance come together in this riveting, interactive work. After its hugely successful premiere earlier this month in a collateral event for the 56th International Venice Biennale art exhibition, Toronto audiences can now experience this ever-changing project, which runs until May 20 at the Theatre Centre, 1115 Queen St. W. in Toronto.

Burnish seats Batdorf inside a self-contained mini-theatre with lights that are controlled by her heart rate and sensors attached to her body. The audience is invited to choose elements that affect her performance “loop,” which integrates music, digital technology, poetic text, art objects, movement and singing – all based on viewer interaction. Several people can witness the artist inside the mini-theatre through a variety of instruments, while one person at a time influences her choices.

“We abbreviated the show for the opening at the Biennale, and for the visual art context,” Batdorf said. “People were very moved and at times it was challenging to keep up with the demand. Here in Toronto, in a theatre context, I’m doing a longer performance loop of 12 to 17 minutes, and people will be able to get a [free] ticket for a specific time when it gets busy.”

Graduating theatre student Alexa Polenz was an assistant on the project and is also working on the Theatre Centre version.

Burnish was inaugurated May 7 at the Venice Biennale as part of Jump into the Unknown, a project of the International Environmental Art Symposium collective Nine Dragon Heads at the Palazzo Loredan dell’Ambasciatore. The collective is an interdisciplinary platform where artists from five continents work in locations that may be environmentally troubled. Their projects look for the creation of a space where experimental, open-air and public art practice results in an ethical artistic message.

Batdorf has been collaborating with Nine Dragon Heads since 2004. Three years ago, she travelled with the group through Uzbekistan as part of a three-part Silk Road environmental art project that had its final show in Tblisi, Georgia.

Featuring the works of 40 international artists in site-specific work, installation, video, sculpture, photography and performance, Jump into the Unknown is uncurated. The project’s strength lies not in the production of a final work, but in the provisional, unfinished, incomplete and ongoing search for meaning. While Batdorf’s Burnish has finished its run in Venice and is now in Toronto, elements of Jump into the Unknown continue at the Biennale until June 18.

The day after Burnish closes, Batdorf flies to Munich for several concerts with Lisa Schamberger, with whom she recently recorded an album, titled Inhale. Other upcoming creative endeavours include lecturing on The Batdorf Technique at the Second International Conference on Teaching Somatics-Based Dance in Boston in July, and choreographing The Living by York University screenwriting professor and Governor General’s Award-winning playwright Colleen Wagner for Toronto’s Summerworks festival. This October will see Batdorf back on the Toronto stage with musical duo Arwinda to perform her show The Smell of the Soul, which they presented in Tblisi, Munich and Jakarta last year.