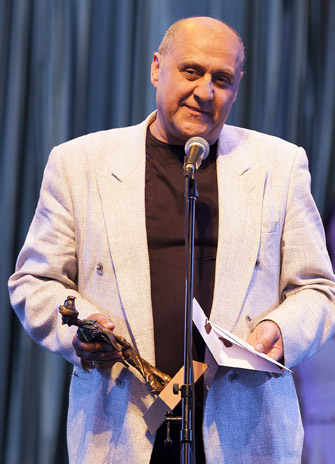 The Dora Mavor Moore Awards are a glittering celebration of Toronto talent in the performing arts. Affectionately known as the “biggest opening night of the year”, the 36th annual event took place Monday, June 21 at Harbourfront Centre’s outdoor WestJet Stage.

Federico García Lorca’s Blood Wedding is a classic of 20th century theatre. Inspired by a fragment of a newspaper story found by the playwright, it tells the story of a family vendetta that comes to a boil when a bride-to-be runs away with the son of the enemy.

Parsa’s career spans two continents and more than three decades. In his native Iran, he studied theatre performance at the University of Tehran and launched a promising career as an actor and director. Arriving in Canada with his family in 1984, Parsa completed a second BA in Theatre Studies at York University and then went on to establish Modern Times Stage Company as one of Canada’s most exciting culturally-diverse theatre companies. His accolades for his work at Modern Times include multiple Doras and a Chalmers Fellowship, among others.

The other four Doras for Blood Wedding were for performance, costume design, scenic design and lighting design. The show was also nominated for ensemble performance.

While they didn’t cross the red carpet at the Dora Awards this year, many other alumni as well as faculty members of York’s School of the Arts, Media, Performance & Design graced the nominee list.

Theatre Professors Shawn Kerwin and Teresa Przybylski were both nominated for outstanding scenic design, for Canadian Rep Theatre’s How do I Love Thee?  and the Maniac Star/Soundstreams production of Airline Icarus,  respectively.

Dylan Bobier (BFA ‘14) drew a nomination for his costume designs for Theatre Rusticle’s The Stronger Variations – designs he initially began developing when the show was produced on campus in 2013 (see YFile Nov. 7 2013).

Dance alumnus Irvin Chow (BFA ‘13) was a nominee for solo performance in Zata Omm Dance Projects’ groundbreaking world premiere vox:lumen, which was also garnered a nomination for ensemble performance. The show was produced in association with Aesthetec Studio and York theatre Professors Ian Garrett and James McKernan, who were involved in a multi-year creative partnership for the production, integrating alternative energy sources for sustainable performance. Vox:lumen was lit entirely with energy created by the dancers, the audience and renewable sources.

Designers Hand and Tracey and director Richard Rose (BFA ’78), the artistic director of Tarragon Theatre, all declined their nominations for Tarragon’s production of An Enemy of the People, as their show was based on a celebrated production of the play by Berlin’s renowned Schaubühne that toured to New York and Montreal.

Administered by the Toronto Alliance for the Performing Arts (TAPA), the Doras are named for Dora Mavor Moore (1888-1979), a teacher and director who helped establish Canadian professional theatre in the 1930s and 1940s. Recognizing the outstanding achievements in Toronto’s performing arts industry, the Doras honour the creators of over 200 theatre, dance and opera productions each year.