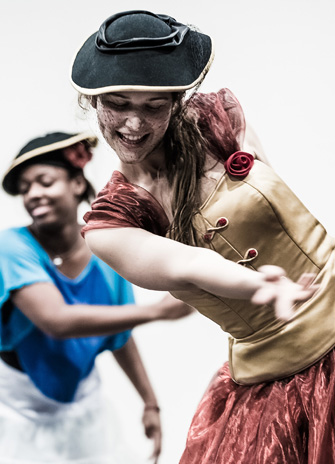 Director Allyson McMackon at a rehearsal for The Stronger Variations. Photograph: Jeremy Mimnagh

Set in the late 1950s on Christmas Eve, The Stronger Variations examines the nature of betrayal, desire, love, loyalty and the “supposed-to-be’s” of the holiday season through the lens of both genders. Following the musical structure of a “theme and variation’, the show offers a kaleidoscope of viewpoints on what happens when spouses encounter their partners’ lovers on the fateful evening.

The Stronger Variations was produced in association with Harbourfront Centre in 2006 with three women alternately playing the Wife and the Mistress and three men playing the male counterparts, the Husband and the Lover.  With the original director McMackon once again at the helm, the show is being recreated by a cast of 11 actors drawn from the fourth-year Acting Conservatory in York’s Department of Theatre.

In this new production, each actor still has a turn as the betrayer and the betrayed in the shifting triangles among the protagonists. But with a larger cast, the ensemble has the opportunity to further develop the worlds within which the emotionally charged confrontations play out.

Left to right:  Jonathan LeRose and Christopher Oswald in a moment of anger between the Husband (left) and the Lover. Photograph: Jeremy Mimnagh

McMackon, who teaches movement and devised theatre at York University, takes a collaborative approach to direction, engaging the students in the process of collectively creating the text and movement.

“I’ve reset only a handful of the original scenes on this cast,” said McMackon. “The rest have been created from scratch.  The Theatre @ York actor-creators bring fresh eyes and youthful perspectives to the relationship themes in the play, and that has led to a whole new version of the work.”

Simultaneously imaginative and practical, the creative process involves condensing or distilling the source text down to the most basic ideas and building characters around the archetypes found in the themes. The actors explore the physicality of these archetypes from their individual perspectives, in improvised situations. Variations on the scenes are created and then deepened.

“What we have to work with is the source, the situation, the bodies and imagery of each performer, a curiosity about action and intention, and a desire to play,” McMackon said. “The production evolves from that. It’s an enormously rich and exciting experience – both for the performers and the audience.”

A talented team of undergraduate theatre students is handling all aspects of the production design and execution of The Stronger Variations. True to the period setting, the costumes by Dylan Bobier reflect a classic Christian Dior silhouette, and the versatile set by Laura Andrew gives a nod to the work of sculptor Alexander Calder, inventor of the mobile.