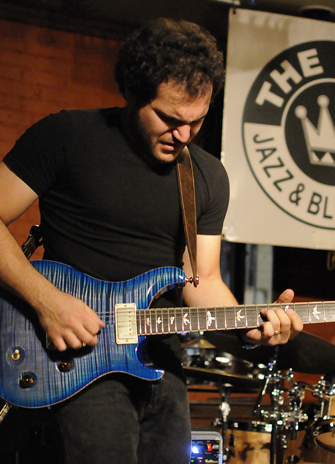 As Toronto heats up, so do opportunities for summer fun in the city. Two of the most beloved long-running music festivals in town are the TD Toronto Jazz Festival, taking place June 18 to 29 this year, and the Beaches Jazz Festival, running July 10 to 26. With a combined total of more than 450 concerts on offer, making a must-see list is a daunting challenge. Get started with this tip sheet highlighting York jazz artists taking centre stage at the fests.

The program includes compositions by renowned bassist and composer Dave Holland, who was jazz artist-in-residence at York earlier this year (see Feb. 23 YFile story), as well as popular tunes by Duke Ellington, Pat Metheny and Bill Holman plus intriguing jazz arrangements of rock songs by Radiohead and Soundgarden.

Newly minted music grad Lorenzo Polese (BFA ‘15) is the orchestra’s lead tenor saxophonist, and occasionally doubles (switching instruments mid-song) on flute or soprano sax. He has played with the ensemble for two years, and enthused about the experience.

“I always looked forward to Tuesday evening rehearsals,” Polese said. “The Jazz Orchestra is the perfect place to apply your craft. Not only is it one of the most fun courses you can take as a jazz musician at York, but it’s also an intense workout of your abilities. I can’t even begin to describe how much my sight reading has improved since I joined.

“Being in the orchestra got me on stage at one of Canada’s hottest jazz venues, The Rex Jazz and Blues Bar, and allowed me to participate in a workshop with Dave Holland where he gave us feedback on performing his compositions.”

Polese is equally complimentary about the band director. “Working with Mike [Cadó] was a great pleasure. He’s always open to the opinion of the group as a whole and has been a great mentor these past few years,” Polese said.

Cadó, a jazz guitarist, will perform with his own quartet, The Groovemeisters, on June 21 from 2 to 3:15pm at the Shops at Don Mills.  Playing a combo of original tunes and fresh takes on jazz standards, the Groovemeisters’ funky, up-tempo material is sure to be a crowd-pleaser.

Turcotte’s June 27 appearance with the York University Jazz Orchestra is actually his ninth turn on stage during the TD Toronto festival. It’s a busy 10 days for this in-demand trumpet player, who has a gig almost every night in Toronto plus two excursions out of town.

Turcotte’s local performance highlights include the Dave Young Quintet June 20 at 8pm at the Rex Hotel, The Sicilian Jazz Project led by Michael Occhipinti (BFA ’92) on June 22 at 8pm at Hugh’s Room (followed by the Rochester Jazz Festival June 23), and Creation Dream featuring the music of Bruce Cockburn June 24 at 5pm at the Rex (preceded by an appearance June 23 at Waterloo’s Jazz Room). At the Beaches fest Turcotte will be found performing with CaneFire on July 11 at 5:30pm and with banjoist Jayme Stone on July 19 at 2:30pm, both at the Woodbine Park Main Stage.

Turcotte also was selected to be in the Panamania Lula Big Band with Danilo Perez which performs July 21 at 6pm at Nathan Phillips Square and at Koerner Hall on July 22 at 8:30pm.

York music alumna and contract faculty member, jazz vocalist and bassist Rita di Ghent (BFA ’83) will be backed by Mike Daley (MA ’97, PhD ’07) on guitar and Rich Brisco on drums June 23 at 9:30pm at Musideum. Di Ghent, who has been described as a “street poet” of Toronto, offers an unusual take on contemporary music and poetry, incorporating jazz with a form of hip-hop that is distinctively her own.

York music alumni are also making a strong showing at the Beaches Jazz Festival. Singers and multi-instrumentalists Suba Sankaran (BFA ’97, MA ’02) and Dylan Bell (BFA ’95) appear as the Free Play Duo and with Retrocity on the fest’s SING! A Cappella Stage July 18 at noon and 2:20pm, respectively.

The following day, July 19, vocalist Ross Lynde (BFA ’00) takes the SING! stage with the award-winning touring and recording ensemble Cadence, billed as Canada’s premier a cappella group. Managed by York alumnus Carl Berger (BA ’99), the quartet has wowed audiences across the country and around the world for almost two decades.

For more information on the jazz festival concert venues and tickets, follow the links embedded in the dates.