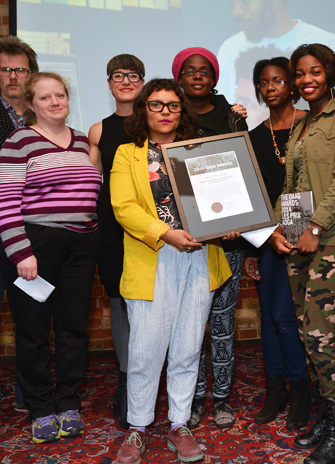 The Art Gallery of York University (AGYU) has won seven awards for excellence in curation, writing, education and exhibitions, by the Ontario Association of Art Galleries (OAAG), winning across all the major categories.

The AGYU’s Assistant Director and Curator Emelie Chhangur picked up the coveted Exhibition Design and Installation Award for her 2013 exhibition Sara Angelucci: Provenance Unknown, which brought together two new bodies of work by Toronto artist Sara Angelucci: The Anonymous Chorus and Aviary, both inspired by found, unattributed vintage photographic portraits that the artist purchased on eBay. In their comments, the jury said: “The exceptional exhibition installation and design heightens the experience of this thoughtfully presented exhibition of photography and video.”

The AGYU continued to be recognized for its innovations in education and public programming. It won the Education Award for its 2013 exhibition Centre for Incidental

Activisms (CIA) #2 and If We Ruled the World. The Centre for Incidental Activisms (CIA) #2 was the second in a series of experimental exhibition projects that re-envisioned a different role and function for the gallery space. CIA #2 brought together members of the Toronto art community and members of the Jane-Finch community in an open situation of art-based research driven by unconventional aesthetic and social investigations. Over the course of the two-month exhibition, projects were developed in the gallery through hands-on “studio-based” explorations, workshops, screenings, hosted events, guerrilla publishing, and other convivial encounters with individuals and groups brought into the gallery from York University and beyond. Jury comments described the CIA#2 as an “innovative education outreach program that transformed the AGYU as a creative platform, an active production site for the diverse youth in the Jane and Finch community. The AGYU was praised for its interdisciplinary approach and for envisioning the University gallery as a laboratory for research, investigation and production”.

Kudos also went to the AGYU in the Public Program Award for its 2013 off-site exhibit, Killjoy’s Kastle: A Lesbian Feminist Haunted House, by artist Allyson Mitchell, co-curated by Mitchell and Chhangur. Mitchell, assistant professor in the School of Women’s Studies in the Faculty of Liberal Arts & Professional Studies at York University, celebrated Hallowe’en with a crowd-sourced, lesbian-feminist, and queer-fear-fighting celebration Kill Joy’s Kastle: A Lesbian Feminist Haunted House located at 303 Lansdowne Ave (at Dundas) in Toronto. The jury had high praise for this public art exhibit. “This was an exceptional public program that reached out far beyond the walls of the gallery.” The jury made special mention on a number of aspects of the program including its unique combination of a performance event and a durational project; the fact that it was a long-term research project incorporating 100 participants; had skill sharing crafts and social organizing and a defined pedagogical approach; its numerous influences and the mentoring possibilities between senior and emerging artists; and the fact that the Kill Joy’s Kastle garnered national and international attention and attracted 5000 visitors, including 1000 people at the opening night who cued for three hours.

The AGYU publication Will Munro: History, Magic and Glamour, based on the exhibition of the same name curated by AGYU’s Philip Monk and Emelie Chhangur, won top awards in three categories. First was the prized Art Publication of the Year award. The jury was enthusiastic in their praise for the art book, stating: “This exceptional publication is a moving testament to the artistic practice and personality of Will Munro as well as a snapshot capturing the energy and vitality of his contributions towards bringing together various facets of the Queer community in Toronto.”

Luis Jacob then won the Art Writing Award for his essay in the book “Where there’s a Will there’s a Way.” The jury described Jacob’s essay as “poetic, rich, rewarding exploration of the practice and person of Will Munro. A personal and diaristic reflection of the Toronto queer community and history”.

Finally, Lisa Kiss Design won the Catalogue Design Award for the same book. The publication was cited for its bold visuals, layout and design, which the jury said “delivers the persona of Will Munroe in a very dynamic and authentic manner”. Another Design Award for Art Book went to Encyclopaedia of Incidental Activisms by Ame Henderson and Evan Webber. The jury praised the use of text as the book’s only visual element, the choice of colour, paper stock and typeface and production quality.

The OAAG Awards recognize artistic merit and excellence and the awards program is one of the most comprehensive and best known among Ontario’s art awards. The AGYU has always been a consistent leader in these annual awards. The last time a gallery won this record number of awards was in 2009—when the AGYU won seven awards. The awards were presented Nov. 5 at the Gladstone Hotel in Toronto.