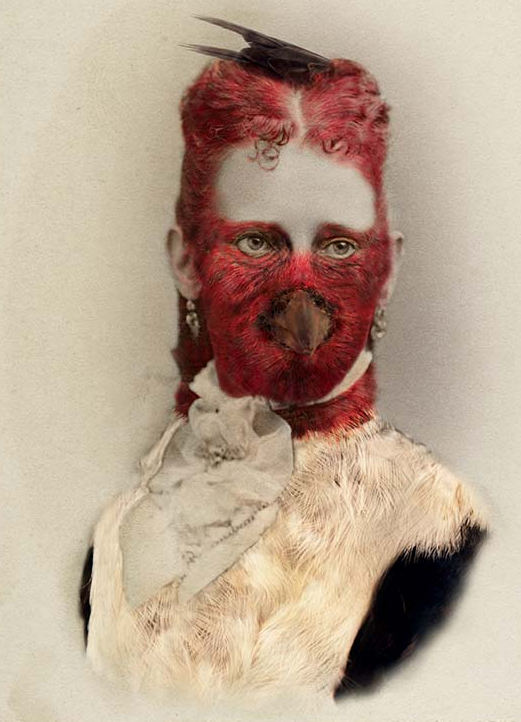 The newest exhibition on display at the Art Gallery of York University (AGYU) combines history, ornithology and artistry into a compelling and thoughtful presentation.

Titled Provenance Unknown, the exhibit  brings together two new bodies of work by Toronto artist Sara Angelucci: The Anonymous Chorus and Aviary, both inspired by found, unattributed photographic portraits that the artist purchased on

eBay. Provenance Unknown will be on display at the AGYU until June 16.

In Provenance Unknown, Angelucci moves away from exploring the familiar to interrogating the anonymous; from investigating her own identity (and family lineage) to tracing the history of others. Throughout her eccentric inquiry into the photographic portrait, she performs role of amateur historian, only to very different ends. Angelucci mixes analogue sources with digital techniques to combine artistic genres through collaboration with composers, singers and ornithologists. The Anonymous Chorus and Aviary open a temporally suspended space between past and present, where the subjects of these lost portraits may come to life, once again but in a transformed state of being. These works represent a distinct shift in the artist’s practice. The exhibit is curated by AGYU Assistant Director & Curator Emelie Chhangur.

When photographs are untethered from their historical contexts and are cast out into the world, unattributed, their stories are left to the imaginative projection of those who “recover” them. In this new situation, historical fact is open to poetic interpretation while clues embedded in the photograph can be explored in existential rather than purely factual terms. In Provenance Unknown, Angelucci offers a space of contemplation between what is knowable about the human form in the photograph and what can be imagined from the other side.

The Anonymous Chorus unfolds a “story” contained in a still photograph as a 10 minute video. The video probes the inter-familial relations in the large family grouping and conjures its historical context by evoking being through breathing and communication through sound. Individual voices come to life through song as Angelucci matches those portrayed in the image to choral singers with whom she collaborated to perform period songs by American composer Charles Ives (1874 – 1954). This musical transcription of an American family grouping creates an uncanny period portrait as the singers vocalize through their photographic stand-ins, mediating through song on existential questions of being and loss. The shroud of song amplifies the “second death” of its anonymous subjects lost to historical oblivion.

In Aviary, Angelucci adapts known photographic genres and biological taxonomies to entirely new fictional ends. In this work she reveals “other species not yet known to any system of taxonomy,” suspended photographically in a state of perpetual becoming. Aviary’s photographs originate from several collections of popular Victorian era cartes-de-visite and cabinet card portrait photographs meticulously interwoven with details from images Angelucci took of extinct and endangered North American birds preserved in the Royal Ontario Museum’s ornithology collection. Through her magical transformations, Angelucci breathes life into these newly-forming, hybrid creatures while conjuring with flight and fancy the otherworldly manifestations of “spirit photography” beloved by the Victorian era. Aviary resides at the mysterious threshold of photographic representation, chimeric in its vivifying potential.

Provenance Unknown aligns us with the spirits of the unknown and of un-knowing, opening up new fields of vision uncannily shaped into being through symbolic re-enactment. It mirrors Angelucci’s own aleatory process of discovery through her curious journey into the past via photography’s unknown.

Provenance Unknown is organized by the AGYU and presented in partnership with the Scotiabank CONTACT Photography Festival as one of the primary exhibitions.  Special assistance to the artist was provided by Mark Peck and the Ornithology section of the Department

of Natural History at the Royal Ontario Museum for the loan of the vitrine. Support for The Anonymous Choir was provided by the Ontario Arts Council.

AGYU Vitrines
Montreal-based sculptor and musician Nader Hasan’s investigation of nature and materiality has been captured within the glass cases of AGYU Vitrines – as an aviary of death and commodification.  The vitrines encapsulate the wonder of Natural History Museum displays, the tantalizing allure of retail shop windows, the “half-life” of reclaimed urban materials such as mummified animals, food waste, plant remains, money, metal, and ash.Peering through the window into diorama of carcasses, plastics, and digested dollar bills, the vitrines offer a spectacle of biological systems, chemistry, geology and metallurgy. The sympathetic arrangements make us question the very way we understand what things are, how they have come to be, and what possibilities exist within their preservation and decay.