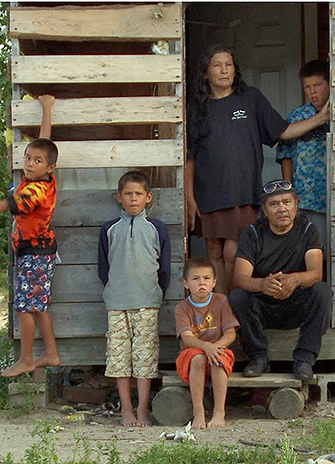 The 15th annual Planet in Focus Environmental Film Festival, designed to enlighten, engage and entertain with film about the world, will screen the documentary film Honour Your Word at York University Friday.

Honour Your Word is written, directed and produced by Professor Martha Stiegman of York’s Faculty of Environmental Studies (FES), which is one of the co-sponsors of the film festival. FES Dean Noël Sturgeon will introduce the film, which will screen Friday, Nov. 7, from 3 to 4:30pm, in the Nat Taylor Cinema, 102 North Ross Building, Keele campus.

Honour Your Word is an intimate portrait of life behind the barricades for the Algonquins of Barriere Lake, an inspiring First Nation whose dignity and courage contrast sharply with the political injustice they face. The title refers to their campaign slogan demanding Canada and Québec honour a precedent-setting conservation deal signed in 1991.

A panel discussion will follow the screening with the filmmaker along with Barriere Lake Community spokesperson Marylynn Poucachiche and Shiri Pasternak of Barriere Lake Solidarity. Stiegman spent four years shooting the film called poetic and heartfelt, and one that challenges stereotypes of “angry indians.” Honour Your Word juxtaposes starkly contrasting landscapes – the majesty of the bush, a dramatic highway standoff against a riot squad, daily life within the confines of the reserve – to reveal the spirit of a people for whom blockading has become an unfortunate part of their way of life, a life rooted in the piece of the Boreal Forest they are defending.

The film draws its audience into the lives of two young leaders: Marylynn Poucachiche, a mother of five, and Norman Matchewan, the soft-spoken son and grandson of traditional chiefs. Both spent their childhoods on the logging blockades their parents set up to win a sustainable development plan protecting their land. But it turns out signing the agreement was the easy part.

Now, 20 years later, Norman and Marylynn are taking up the struggle of their youth to force Canada and Québec to honour their word. Their fight may seem an impossible one, but as we spend time with Marylynn, Norman and the community they are so deeply a part of, the audience grows to identify with the impulse driving a struggle that spans generations. For these people, standing up is a necessity, not a choice – and they are compelled to do so, despite the odds.

York cinema and media studies Professor Brenda Longfellow of the Faculty of Fine Arts will present her interactive, oil-drilling documentary OFFSHORE as the Industry Day “Case Study” Friday, Nov. 7, at 1:30pm at Toronto City Hall. OFFSHORE, co-directed with Glen Richards and Helios Design Lab, is an interactive web documentary about the next chapter of oil exploration. “Extreme Oil” or “Cowboy Drilling” takes place hundreds of miles offshore, thousands of feet beneath the ocean floor, in dangerous and risky conditions where the hazards are immense but the profits are bigger, and where the consequences of something going wrong are catastrophic.

OFFSHORE uses a virtual offshore oil rig as the central interface, combining an innovative mixture of virtual immersion and documentary elements. Beginning with stories from the Deepwater Horizon disaster and journeying to the Arctic, Brazil and Russia, the film probes the consequences and prospects of this new energy frontier.

Trick or Treaty, directed by Alanis Obomsawin, a member of the Abenaki First Nation and a documentary filmmaker, will screen Friday, Nov. 7, at 8pm at Jackman Hall, Art Gallery of Ontario. FES Associate Dean Ravi de Costa will introduce the film, which explores “Treaty 9” of 1905, a monumental document in the history of Canada’s First Nations tribes. Obomsawin will be in attendance. She will also be part of a Master Class earlier in the day with journalist/author Geoff Pevere, from 2:45 to 3:45pm, at Toronto City Hall.

Planet in Focus – Industry Day is organized by York grad student and alumnus Mark Terry (BA ’90). The day is devoted to providing creative and business content for filmmakers and opportunities to network with distinguished industry professionals. It will include a Green Screen Initiative Panel, from 11:30am to 12:30pm, discussing advances in environmentally sustainable production practices in film and television production. More information about Industry Day can be found on the Planet in Focus website.

Osgoode Hall Law School PhD Candidate Michael John Long (BA ’04, MES ’08, LLM ’11), an alumnus of York’s Master in Environmental Studies program, is the academic programmer at Planet in Focus and an executive board member at York’s Institute for Research and Innovation in Sustainability, which is hosting the festival at York this year.

In addition, FES alumna Tzeporah Berman (MES ’95) will receive the Eco-Heroes Award at this year’s festival.

The Planet in Focus film festival was started by FES alumnus Mark Haslam.