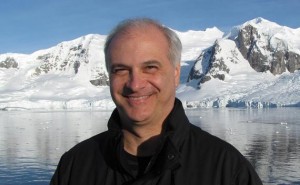 Mark Terry on location in Antarctica

After graduating with a BA in English in 1980 from Glendon College, Mark Terry has charted quite a course since returning to pursue a master’s degree in humanities at York. It is not your typical return to the classroom, however – the 56-year-old’s work continues to take him far beyond the University’s walls.

A broadcast journalist and documentary filmmaker for 25 years, Terry was awarded the Enbridge Graduate Student Award this past summer. Valued at $12,500, the award supports top graduate students focused on sustainability research at York.

His research focuses on the evolution of the documentary film as an instrument for social change in Canada. A few years back, his filmmaking career led him to expeditions chronicling recent climate research in both Antarctica and the Arctic, which has been used by the United Nations to create new environmental policy. “Up until now, film had never been used as a data-delivery system to UN international policy-makers,” he says. “My film presentations at the climate summits in Copenhagen (2009) and Cancun (2010) resulted in a more accessible medium to the complicated scientific information policymakers had to deal with in the past through written text alone.”

Terry’s many contributions in the field have not gone unnoticed to the greater public. Last year he was presented with a Diamond Jubilee Medal during a special ceremony at Glendon. The Explorers Club, a noted research organization with a history dating back to the turn of the 20th century, awarded him their highest honour — the Stefansson Medal — for outstanding achievement in polar exploration. And, the Academy of Canadian Cinema and Television honoured him with a Gemini Humanitarian Award.

Along with these noted accomplishments, he has always credited the University for helping him on his life path. “York has always been a special place for me. My career grew directly from the education I received earning my bachelor degree at Glendon 35 years ago. I also met my wife there and today have two wonderful children, Mary Anne — a York grad herself — and Herb, a professor in Ecuador.”

For Terry, 2014 has been just as rewarding. Along with the funding award from York, the Royal Canadian Geographical Society inducted him into their College of Fellows at a ceremony in Ottawa with Prime Minister Stephen Harper. He was also recently invited to the opening of The Explorers Museum at Charleville Castle in Ireland, where he donated his polar expedition gear to be displayed in a special exhibit dedicated to polar exploration.

Between all of this, Terry has contributed as a staff member in the Faculty of Liberal Arts & Professional Studies (LAPS), and is currently assisting in the planning of Glendon’s 50th anniversary celebrations by, as luck would have it, producing a film.