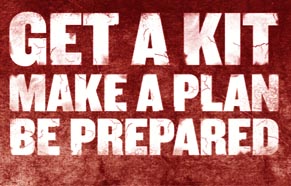 New research by York University Professors Jane Heffernan and Derek Wilson shows that in the event of a zombie apocalypse, the best way to survive is to be prepared.

Branton advises that you consider assembling an emergency kit for your home and have one for your car. It should be packed in a container that is both easy to access and carry. (She notes that there won’t be a need to carry your kit anywhere if you are faced with an army of blood-thirsty zombies.)

“You will probably want to shelter in place,” she says, “and hope for the best.”

A complete emergency kit, one that is suitable for emergencies such as a power outage or ice storm, should contain the following items:

Water – two litres of water per person per day is appropriate (include small bottles that can be carried easily in the event of a need to evacuate)
Food – assemble foods that won’t spoil, such as canned food, energy bars and dried foods (remember to refresh the food and water supplies once a year)Manual can opener
Flashlight and extra batteries
Battery-powered or wind-up radio with extra batteries (to keep track of emergency communications and broadcasts)
First aid kit
Candles and matches in a waterproof container
Basic tools, duct tape, plastic sheeting

Be sure to include extra items, such as:

Prescription medications, infant formula and diapers or equipment for persons with disabilities
Extra keys for your car and houseCash (include smaller bills, such as $10 bills and change for payphones)
A small camp stove and fuel
Toiletries, hand sanitizer, toilet paper
Extra clothes and blankets
Photocopies of important identification documents and prescriptions

Always have an emergency escape plan and include a copy of it with your kit. Branton says it is important to rehearse the plan with family members and have a designated meeting spot.

When faced with a trying to outlast a zombie plague, Branton says you should consider stockpiling up to 60 litres of water per person, which is enough for one month, and include bleach or water purification tablets. As well, she recommends a larger supply of candles, matches, toiletries, medication and food.

“Boredom will be a big factor since you may have to hide for 28 days or more,” she says. “You may want to consider adding a few board games, playing cards, puzzle books and toys. An axe or baseball bat would also be handy as I’ve heard that both are effective when dealing with the undead.”

For more information, visit the Government of Canada’s Get Prepared website.