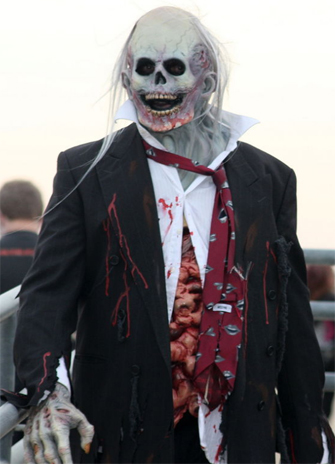 York Professors Jane Heffernan and Derek Wilson investigate the mathematics of a zombie plague. What are humanity’s chances?

In the event of a zombie apocalypse, are humanity’s days numbered? Do we stand a chance of surviving an attack of the undead?

York University professors and resident zombie hunters Jane Heffernan and Derek Wilson decided to find out, and the results of their investigation are revealed in “The Undead: A Plague on Mankind or a Powerful New Tool for Epidemiological Research,” part of the forthcoming book The Mathematical Modelling of Zombies.

A compilation of papers edited by University of Ottawa mathematics Professor Robert Smith? (the question mark is part of his name), the book addresses complex statistical and mathematical modelling concepts and is centred on the zombie apocalypse. It involves the work of mathematicians, statisticians and scientists from across Canada. By understanding how to combat zombies, the tongue-in-cheek book deftly covers a wide variety of modelling techniques that are applicable to other real-world issues (such as diseases and ecology).

Heffernan, who is a professor of mathematics and statistics and director of the Centre for Disease Modelling in the York Institute for Health Research, and Wilson, a professor of chemistry in York’s Faculty of Science, were invited by Smith? to contribute to the book. The dynamic duo decided to compare the zombie apocalypse to the bubonic plague to see if similarities between the diseases could provide a model that would predict humanity’s chance of survival.

“Both diseases take a long time to kill their hosts,” explains Heffernan. “We focused on comparing a plague of zombies to the bubonic plague.”

To obtain the data they needed for their model, Heffernan and Wilson first established a number of important criteria. They imagined themselves as part of a team of researchers working at the Center for Research in the UnDead (CRUD). CRUD’s dwindling human resources make it paramount for the team to quickly and efficiently model an advancing zombie apocalypse. “What kind of document can you leave behind when there is a horde of zombies trying to break down the door to your lab?” asks Heffernan. “Our research looked at how to quickly create a model to predict the outcomes of a zombie plague and then determine how, and if, there are ways to fight it.”

Heffernan and Wilson decided to use the “historical” records available in the films Night of the Living Dead, 28 Days Later, Dawn of the Dead and Shawn of the Dead to gather data about previous zombie plagues. They also made use of historical references and current epidemiological data on the bubonic plague to determine its process. They compared the different diseases to determine survival rates.

“In the origins of zombies and the bubonic plague, there is common ground,” says Heffernan, noting there was difficulty in building a model to predict survivor and death rates because of the lack of verified numbers for both diseases.

The two key conditions identified as having an impact the numbers in the zombie plague are the small, unverified numbers of survivors barricaded in shopping malls, office buildings and pubs with no means to communicate, and the huge and growing numbers of biologically dead zombies.

The bubonic plague is an efficient killer, says Heffernan, but a lack of verified numbers from the Black Death, which is estimated to have killed between 17 to 200 million people in 14th century England, would have an impact on the model. One key point led the pair to conclude that a zombie plague would have a worse outcome, and this is due to the fact that zombies can continue their undead existence for hundreds or even thousands of years. This means the “death” rate for zombies is very small. The death rate for humanity would be high in a zombie plague because of several factors, including: the sheer number of undead, their “longevity in death,” the efficient transmission rate of the zombie “virus” (through brain eating and biting), and the limited methods available to eliminate zombies (their data showed that cricket bats and bullets are the only proven ways to destroy the infected).

Heffernan and Wilson modeled the Human Immunodeficiency Virus (HIV) and vampirism and using their model, they compared these two “chronic” diseases against the plagues. They found that in the event of a zombie plague, humanity’s days are numbered and we would last about a month. We would have a much better chance of surviving vampirism because of the low and subtle rate of transmission.

While their humour is evident throughout the chapter, Heffernan and Wilson stress that the tools they used to model the zombie plague are the same used to model future disease pandemics. Why is this important? By understanding the unlikeliest of scenarios, insight is gained into the trajectories of diseases. The models developed are important tools in humanity’s arsenal against the unexpected, or the undead.