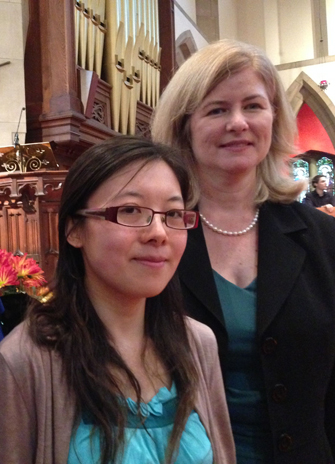 Ing’s winning work, titled “All I Understand”, is an original gospel hymn inspired by Psalm 23: “He makes me lie down in green pastures, He leads me beside quiet waters, He refreshes my soul. He guides me along the right paths.”

The Pax Christi Chorale, led by its artistic director, York music Professor Stephanie Martin, gave the debut performance of Ing’s hymn and other new works from the competition in a public concert to a full house at Grace Church on-the-Hill in Toronto.

“All the competition entries offer fresh interpretations of our world and our place in it,” said Martin, “but Joannie’s hymn rose to the top. It’s a beautiful and memorable song, and I’m thrilled to add it to our musical repertoire.”

Video: Stephanie Martin on the reasoning behind the Great Canadian Hymn Competition and the importance of new hymns

The Oct. 6 competition drew 75 submissions from across the country, from St. John’s to Victoria, by both seasoned and emerging composers working in a diverse range of styles. To select the winners, Pax Christi’s artistic staff sang through every hymn and came up with a shortlist of 17 works. “All I Understand” was awarded first place by the chorale, who voted for their favourites after an initial rehearsal and again after a second rehearsal, to choose the top three.

Ing said she was “ecstatic” to learn of her win.

“I feel incredibly honoured that my piece was selected from so many excellent submissions,” she said.“The concert

was great, and I enjoyed all the hymns presented, many by established and well-known composers.It was a humbling experience for me.”

Ing wrote the lyrics as well as the music for her hymn. Her song starts off with the line: “I don’t understand,” followed by a list of things in life or nature such as “how the flowers grow” and “how the river flows.”  The chorus is uplifting in resolving those questions, with the declaration: “all I understand is, He guides me by the hand and He leads me to still waters.”

Hearing the work performed was a wonderful experience, said Ing. “Pax Christi Chorale did a fantastically upbeat rendition. I especially loved how the choir created layers in the voices. The chamber choir started with the first verse, with more choristers joining in the subsequent verses, creating a full and powerful sound by the end. It was dramatic and beautiful.”

“’All I Understand’ is a wonderful addition to the choral repertoire,” said music Professor Karen Burke, founding director of the York University Gospel Choir and the co-founder and director of the Juno Award-winning Toronto Mass Choir.

Ing has a longstanding interest in classical contemporary music, and a wealth of experience as a performer and composer of both sacred and secular music. Last year she sang with the York University Chamber Choir. Currently, she is member of the Toronto Cantata Chorus and a worship leader at Scarborough Community Alliance Church. Her choir friends sang through numerous drafts of “All I Understand”, giving her opportunities to refine her hymn.

Ing’s master’s thesis, titled “Addicted to Beauty: Piano Music from Poetry”, consisted of four original piano pieces inspired by poetry and a discussion of the role of the artist in society. In November 2012, she released an album of contemporary arrangements of lesser-known hymns with her band, the Hymn Remix Project.

Fresh from its Pax Christi success, Ing hopes her new hymn, “All I Understand”, will be given voice by other choirs in future. Meanwhile, the composer is gearing up for a scholarly presentation at the annual conference of the British Association for Slavonic and Eastern European Studies taking place at Oxford University, England. The topic this year is Scandals in Musical History, and on Nov. 2, Ing will contribute her paper, titled “The Rite of Spring: Celebrating One of the Most Infamous Riots of the 20th Century”, that she originally penned for the Sacre Celebration: Revisiting, Reflecting, Revisioning, a special topics conference presented by the Society of Dance History Scholars in partnership with York University’s Faculty of Fine Arts in April 2013 (see YFile story).