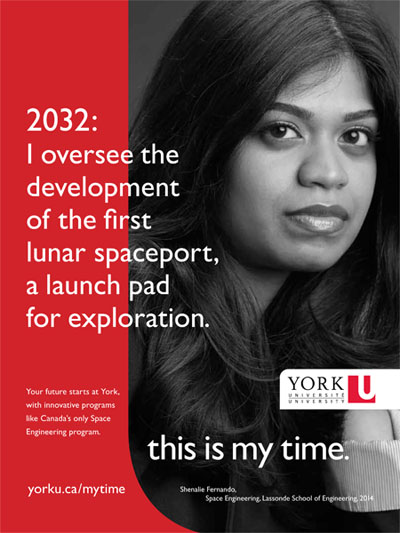 Building on the success of the “this is my time” brand awareness campaign launched last fall with student “testimonials with a twist”, York University’s campaign returns this week with an expanded focus that incorporates student profiles and those of the University’s accomplished faculty and alumni.

Targeted primarily at high-school students (their parents and influencers) considering their postsecondary options, the second phase of the multi-year campaign expands the message that York University is the destination of choice because of its innovative programming, award-winning faculty who are global thought leaders, and talented alumni who are making an impact on the world.

Shenalie Fernando, a student in the Space Engineering Program offered by the Lassonde School of Engineering, is one of the current York U students featured in the campaign

“This second phase of our brand awareness campaign furthers the University’s efforts to develop a clear, differentiated and compelling brand position for York. Expanding our profiles to include faculty and alumni will showcase the extraordinary talent at York and advance our mission of pursuing and promoting excellence in research, teaching, and service to society,” says York President & Vice-Chancellor Mamdouh Shoukri. “This exciting opportunity to reflect the core DNA of York University will bring greater clarity to who we are, what we aspire to be, and what sets us apart as a leader among Canadian postsecondary institutions.”

Starting in September and continuing through January 2014, advertising featuring the visions of current students and alumni will roll out on social media, in print and on the web. Later this month, the two University shuttles that transport staff, faculty and students between the Keele and Glendon campuses will be adorned with a stylish, new “this is my time” wrap, converting the vehicles into mobile ambassadors for the York U message. Large scale banners and flags will decorate the York campuses to tap into the strong pride that York faculty, staff and students have in the University.

“York is widely known for some of its strengths however, it is not as well known for areas such as science, health, engineering and programs that are unique to the University so we are highlighting them,” says Susan Webb, chief communications & marketing officer, Communications & Public Affairs. “The message is that York U is shaping the global thinkers who will define tomorrow with our professors who are global leaders, innovative programs and partnerships with more than 280 universities around the world.

“This year continues the focus on students turning their passion into action,” says Webb. “Our quantitative research conducted this spring following the launch of ‘this is my time’ showed that our approach resonates with prospective students, their parents and influencers and helps them better understand the innovative programs students are exposed to at York.”

In addition to the inspiring visions of York’s current students, two new pillars are being added to the campaign to highlight how far a York degree can take students. The pillars showcase a cross-section of York U’s most accomplished alumni, individuals who have used their education to make a significant contribution to society, and professors whose visionary research and scholarship have positioned them as global thought leaders.

Offering living proof of the excellence of a York education are a number of the University’s most notable alumni. Some of the grads featured in this year’s campaign include: Canadian astronaut Steve MacLean; Michael Tulloch, a judge of the Court of Appeal for Ontario; CTV national television news anchor Sandie Rinaldo; scientist Roger Pulwarty; Joel Cohen, the award winning writer for The Simpsons television show; Rick Waugh, the chief executive officer of Scotiabank; Carol Wilding, president & CEO of the Toronto Board of Trade; Pernille Ironside, UNICEF child protection advocate; Dan Kanter, the music director for pop sensation Justin Beiber; Dan Riskin, an evolutionary biologist and Discovery television host; and Kathleen Taylor, the first woman to chair a major Canadian bank’s board of directors.

Faculty who inspire the future vision of York students will also be featured in the campaign. Among those profiled are bullying researcher Debra Peplar and robotics scientist John Tsotsos. There are also links to stories on the new yorku.ca/mytime microsite that showcase the breadth and excellence of York U researchers. The objective of all this activity, says Webb, is to enhance the University’s strong reputation with the goal of making York U a first choice for students applying for postsecondary education.

The campaign will continue to focus on raising awareness in the Greater Toronto Area of the power and potential of a York degree through integrated advertising that will be rolled out in stages over the next few months. There’s a vibrant new presence planned for the Ontario Universities Fair that takes place later this month. The integrated media will be augmented by visits to high schools by York recruiters and the fall campus recruitment event.

Debra Pepler, a Distinguished Research Professor in the Department of Psychology in York University’s Faculty of Health, is renowned for her ground-breaking research into bullying and is one of the faculty featured in the campaign

The brand positioning work and campaign were led and developed by York’s Communications & Public Affairs Division in conjunction with doug & serge , the University’s agency of record.

“It has been a collaborative effort across the University,” says Webb, who credits the help of Faculties and many departments in bringing the campaign to life.

“Faculties identified potential students for the campaign. The Alumni Office helped secure featured grads. Campus Services & Business Operations and master planning contributed to developing the strategy and implementation of new signs and banners,” she says. “The Division of Students helped bring the campaign to life in recruitment. The Office of the Vice-President Research & Innovation identified professors. University Information Technology supported the launch of the yorku.ca/mytime microsite. The University Secretariat provided input on rules and regulations, and the list goes on.”

Attracting top students to make York U their destination of choice is an important marker of success for “this is my time”. The campaign is helping differentiate York University from other Canadian universities by calling on its students, the best ambassadors for the University, whose visions offer positive proof that York U is the place to be.

“York U has so many strengths, acclaimed programs and professors, and this campaign will help share this positive story,” says Webb. “As we embark on year two, with quantitative research behind us, we are proud to show York as the progressive and innovative university that it truly is.”

“Drop by the yorku.ca/mytime microsite and share your York pride with your friends and family,” says Webb.