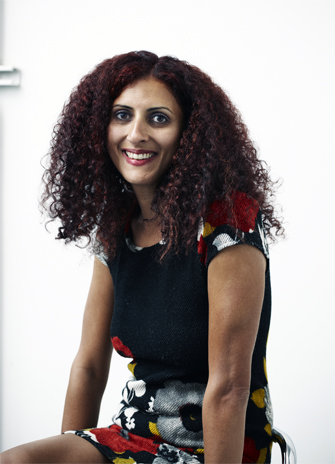 Administered by the Writers’ Trust of Canada, the prize is the richest for works of non-fiction in the country, worth $60,000 to the winning author and $5,000 for each

finalist. Established in 1997, the prize is awarded for literary excellence in non-fiction, including personal or journalistic essays, history, biography, memoirs, commentary and criticism.

Uppal’s book, published by Dundurn Press, had its official launch Wednesday in Toronto following the prize’s announcement. “It’s incredible timing to get the news the morning of the book launch,” says Uppal.

Projection is the strange, comic and surreal experience of her reunion with her runaway mother in Brazil two decades after she drained the family’s bank accounts and disappeared (see YFile‘s Sept. 9 article).

“It took 10 years to write, and the experience was a painful one, so I’m thrilled that readers appreciate the care I took in writing this book as truthfully

and uniquely as possible,” says Uppal. “It seems like it’s already striking a chord.” After an interview with CBC’s Mary Ito, host of “Fresh Air”, the broadcaster received some 300 e-mails from listeners in less than an hour.

“I keep meeting people who are opening up about being abandoned by their own parents or about being the one who did the abandoning,” she says. “This experience is more universal in terms of its emotions and impact than we generally realize because people usually don’t talk about these things.”

The other four finalists are Thomas King for The Inconvenient Indian: A Curious Account of Native People in North America (Doubleday Canada); J.B. MacKinnon of The Once and Future World: Nature As It Was, As It Is, As It Could Be (Random House Canada); Graeme Smith of The Dogs are Eating Them Now: Our War in Afghanistan (Knopf Canada); and Andrew Steinmetz of This Great Escape: The Case of Michael Paryla (Biblioasis).

“It’s a great list of authors and a great list of jurors. I’m very pleased to be among this group and that Projection has already been recognized in the literary community as a book to read,” says Uppal.

The jury chose the five finalists from some 100 submissions. The jury was comprised of Hal Niedzviecki, a writer, cultural critic, and editor who co-founded Broken Pencil, a literary magazine; author Candace Savage, who won the 2012 prize for A Geography of Blood: Unearthing Memory from a Prairie Landscape; and writer Andreas Schroeder who teaches in the University of British Columbia’s Creative Writing Department.

The jury looks for a distinctive voice, as well as a persuasive and compelling command of tone, narrative, style and technique. The winners will be announced in Toronto Oct. 21.