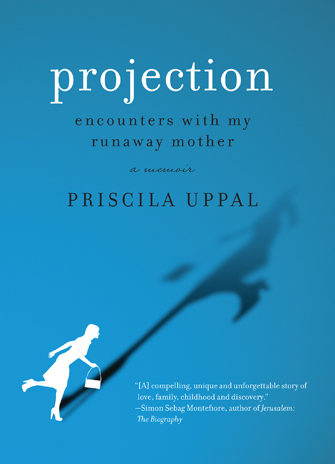 Ten days in an exotic locale filled with contradictions, a reunion between an eccentric, narcissistic mother and an abandoned daughter played out against a backdrop of ceaseless film clips. It sounds like a Woody Allen movie. Instead, it is acclaimed poet

Uppal’s mother drained the bank accounts and ran away to Brazil, leaving behind her daughter, son and quadriplegic husband, whose condition was caused five years earlier by drinking contaminated water in Antigua. Twice in the first year, she tried to abduct her two children, then nothing. No contact. Twenty years later, Uppal happened upon her mother’s website, gathered the courage to call and shortly after flew to São Paulo for a reunion. What followed was not the popular sentimental happy reunion as seen on television shows like Oprah, but something much darker, and funnier.

“I wanted to write a book for the rest of us,” says Uppal, those whose reunions are not the stuff of television dreams. “I also wanted to give people the opportunity to say, ‘there is no relationship here and that’s okay’. Guilt tends to dominate so many people’s lives, especially with family.”

Although Uppal is not fond of her mother, her memoir is no “mommy dearest”. “It’s an

honest, true portrayal….and it’s frequently funny. My mother is an over the top film character,” she says. It’s also rife with absurdity.

Projection, published by Dundurn, will launch Wednesday, Sept 18 at 7pm at No One Writes to the Colonel, 460 College Street, Toronto. The evening will feature a reading and onstage conversation between Uppal and author Camilla Gibb. Everyone is welcome to attend.

Her memoir opens with a scene from the film Blade Runner in which someone is being interviewed to ascertain if they are human or replicant. To determine this, the subject is asked to talk about their best memories of their mother, the humanizing factor (another aspect Uppal explores). The interviewee promptly stands and shoots the interviewer three times. This, says Uppal, is her mother’s favourite movie. “It speaks to her imaginative life and brings up some really interesting questions,” says Uppal.

Her mother lives in and through films. A film critic in Brazil, she watches between one and eight movies a day in the theatre. And it is films that form the structure of the memoir, films about mothers and daughters, and about Brazil – which Uppal came to know as a country of deep contradictions.

It is an examination of “how we use art to understand our lives”, says Uppal. But it also an exploration into what happens when fantasy and illusion crash into reality. “For the first three days I was there, my mother never asked me any questions about myself. She just talked about herself.” The reality of who Uppal is in real life “cracked all the fantasies my mother built up to deal with the guilt of abandoning us”. It was too difficult for her to bear. So much so, that when Uppal went back two years later, her mother refused to see her.

The result is a memoir that delves into the strange, comic, surreal experience of a reunion between two strangers of the same family, how art defines us and our relationships, what makes us human – a mother? – and how illusion can create its own reality.

She is the author of nine collections of poetry, including Ontological Necessities, which was shortlisted for the Griffin Poetry Prize; and the novels The Divine Economy of Salvation and To Whom It May Concern. Her works have been published internationally and translated into numerous languages including Croatian, Dutch, French, Greek, Italian, Korean and Latvian.