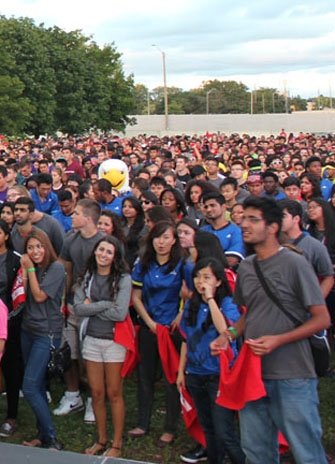 The York cheerleading squad  then got the crowd ready for the appearance of the Lions men’s football team.

Myles Gibbon, the York Lions men’s football team captain, was so overwhelmed by the spirit that he couldn’t resist tweeting a picture of the thousands of students. The crowds cheered wildly as York’s President & Vice-Chancellor Mamdouh Shoukri, Vice-Provost Students Janet Morrison and York Federation of Students President Jessica Jessica Thyriar welcomed them to the University.

Then, led by their orientation chairs, the class of 2017 showed how well they had learned the York cheers with a noisy cheer off. The two-hour event culminated with a first: the raising of the Lions’ Pride flag against a brilliant backdrop of red and white fireworks.

Orientation continues throughout this week with a full schedule of comprehensive academic and social activities. The last major event is the Frosh Football Frenzy game on Saturday in York Stadium. The York Lions will take on the Wilfrid Laurier University Goldenhawks in a  highly anticipated matchup, with the Lions looking to make their mark on the Ontario University Athletics league.

For more on all of York University’s events for first-year students, read the orientation overview in the Aug. 27 issue of YFile.