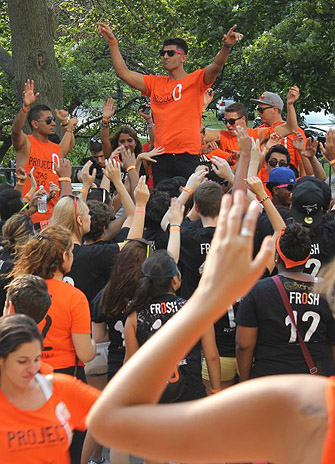 First-years at a McLaughlin frosh party

It’s an Orange Protocol at McLaughlin College and the Gladiators are in control of Stong College. Meanwhile, at Founders College, the heroes are battling the villains and the dragons are on the prowl at Bethune College.

These colourful themes are all part of the fun of York University’s 2013 Frosh Week, which starts Monday, Sept. 2 with residence move-in day.

Frosh Week, also known as O-Week or Welcome Week, is a combination of social and academic orientation events that will see thousands of noisy, energetic first-year students enjoying a week of fun activities and friendships, and along the way they’ll learn about the University.

Each of the eight student-run college councils organizes their own events, some separately, others in conjunction with other colleges. All orientation events are dry, meaning they are alcohol-free with the emphasis instead on safe, enjoyable fun. Residence and commuter students take part in this annual ritual with many students who commute to campus staying the week in specially designated commuter rooms.

This year promises to be bigger and bolder because in addition to the individual college events, there are three pan-University events planned.

The first is a parade and rally in the Harry W. Arthurs Common. It takes place Monday Sept. 2 (after the parental units have departed). Thousands of first-year students will parade to the Harry W. Arthurs Common accompanied by music provided by the York Samba Squad. At the common, they will receive an official welcome from the York Federation of Students, Vice-Provost Students Janet Morrison and President and Vice-Chancellor Mamdouh Shoukri. The speakers will challenge the first-year students to make the most of their University experience.The rally will end with a grand cheer, some dancing and a pep rally led by the York University cheerleaders.

Another pan-University event is a special talk titled, You Had Me at Consent, taking place Sept. 6 at the Rexall Centre on the Keele campus. Presented by York’s Centre for Human Rights, all of York’s colleges will be attending the presentation, which features keynote speaker, Don McPherson, a former National Football League and Canadian Football League quarterback. He will deliver a compelling talk about complex social issues such as violence against women, gender roles, date-culture and consent.

Football is the name of the game at this year’s Frosh Football Frenzy game on Sept. 7

All first-years will get a chance to get York red for the Frosh Football Frenzy game on Sept. 7 at the York University Stadium. They’ll watch the York Lions take on the Wilfrid Laurier University Golden Hawks. There will be contests, prizes and more cheering.

Included in the week is academic orientation, which is mandatory for all new students and is run by the student’s designated college. At the academic orientation, students will connect with their new classmates, learn more about their program of study and get introductions to the academic and social services available across campus. Students register for academic and social orientation through their college, which is determined by their program of study. Parents will also participate in their own orientation to learn what to expect during the first-year of university studies.

Book-ending all academic orientation are college specific events. Here’s a rundown of what’s happening with links to each of the college social orientation calendars:

Calumet College Council orientation leaders have planned an active week with plans to dominate downtown Toronto, quad parties with other colleges, a boat cruise through the Toronto harbour and black light parties.

Founders College first-years will be fighting the good fight in a comic book themed orientation featuring epic battles between good and evil. There’s lots of quad parties, a heroes versus villains toga party, and a boat cruise and feast.

McLaughlin College frosh will learn how to party hard with super-sized quad parties. They’ll travel to Canada’s Wonderland for some high flying rides and Innisfil for sun and beach time but not before dominating downtown Toronto as they deliver the Orange Protocol.

New College will see its first-year students soar through orientation with a movie night, a trip to Canada’s Wonderland, a scavenger hunt in downtown Toronto, and a light’s out tent party.

Bethune College frosh will be laughing it up with a Yuk Yuk’s comedy show. They’ll be looking skyward with an astronomy event and participating in a robot Olympics and dancing the night away with Calumet College.

Stong College froshies will be hunting for the golden fleece during a flag football game. They’ll be dancing with Founders at a quad party and enjoying a formal and intimate evening aboard a boat as it cruises the Toronto Islands.

Vanier College first-years will do the Vandoo with lots quad parties, a visit to Wasaga Beach and a dinner at the Olde Spaghetti Factory in downtown Toronto.

Winters College frosh apply their artistic license and get to know York University through quad parties, cheer offs, a band night and a boat cruise in the Toronto Harbour. They’ll join McLaughlin College for beach games and fun in the sun.

Glendon College froshies will enjoy a bilingual event complete with a visit to the Toronto Frosh Festival, a trip to Wasaga Beach, a casino night and quad sports events and parties.

For more on York University’s 2013 Frosh Week, visit the York U Orientation website.