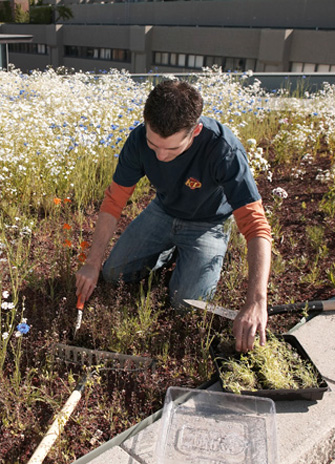 York University has been named one of Canada’s Greenest Employers in an announcement released today by Mediacorp Canada Inc.

The University was named along with 54 other organizations in a competition organized by the editors of Canada’s Top 100 Employers project.

“This award recognizes the incredible efforts of York students, faculty and staff who take action every day to raise awareness and reduce our impact on the environment,” says York President and Vice-Chancellor Mamdouh Shoukri.  “We have made significant strides to date and will continue to lead by example in achieving results that make a meaningful difference.”

Employers were evaluated and ranked on their unique environmental initiatives and programs, success in reducing environmental footprints and employee involvement in sustainability efforts. The Canada’s Greenest Employers distinction specifically recognizes York University for creating the President’s Sustainability Council, its Green Office and Sustainability Ambassador programs, and the “Res Race to Zero” competition in which student residences across campus attempt to reduce energy consumption.

Other notable accomplishments include the following:

York University has invested $40 million in its Energy Management Program reducing energy usage by 25 per cent. In real terms, the energy savings over the course of the program equal 100 million kilowatt hours of electricity, which is enough energy to power the University’s Keele and Glendon campuses for almost an entire year.

The University’s ZeroWaste initiative provides a comprehensive, multi-faceted approach to waste management that encourages faculty, staff and students to divert waste from landfills through recycling and composting. “‘Tri-bins”, with designated containers for recycling and garbage, are located across both campuses, along with organic digesters and several battery recycling bins. For 2012, the waste diversion rate surpassed 60 per cent, with the University achieving its target diversion rate of 65 per cent by 2013.

Staff in York’s Transportation Services department actively encourages commuting to the University through alternative transportation such as public transit, carpools, bicycling or walking. More than 75 per cent of York University students, faculty and staff use alternative means of transportation to campus according to a survey done in 2012 by Smart Commute North Toronto Vaughan. These results have been achieved through expanded and enhanced bus service (including the creation of the priority busway), improved cycling infrastructure such as bike lanes and secure lock-up areas, carpool programs (in cooperation with Smart Commute) and car share programs (in cooperation with Zipcar). The University also offers a shuttle service between the Glendon and Keele campuses, between the Keele campus and the GO Station, and from the Keele campus to the Village residential community south of the University.

On the academic front, the Faculty of Environmental Studies (FES) at York University was the first of its kind in North America. It was founded in 1968, and remains the largest environmental studies program on the continent with nearly 1,300 graduate and undergraduate students. Through FES and other Faculties, the University offers approximately 350 courses that focus on sustainability and the environment, including the Erivan K. Haub Program in Business and Sustainability at the Schulich School of Business (also one of the first programs of its kind in North America).

Community involvement in the York University Sustainability Ambassadors Program empowers volunteer leaders (staff, faculty or students) to act as role models, change agents and committed friends of the environment. They assist with the Green Office program, Campus Clean-up Days and other outreach opportunities, and are champions of sustainability within their departments.

The Green Office program at York makes it easy for faculty, staff and students (with office space) to incorporate a wide variety of sustainable practices into the day-to-day operations of work spaces across the University.

Now in its seventh year, employers who make the Canada’s Greenest Employers list have developed exceptional, earth-friendly initiatives and are actively attracting people to their organizations because of their environmental leadership.

York U community members can now include the Canada’s Greenest Employer logo in their e-mail signatures. To do so, save the Canada’s Greenest Employers logo ( English left, French right) to your desktop and then in Lotus Notes, click “more” in the top navigation bar. Select “preferences”, click “signature” and place the computer cursor on the line immediately following your contact information. Click on the “T” icon at the end of your signature and choose “graphic”. Click again to select the image and then click “import”. Click “OK” to save and close the window.