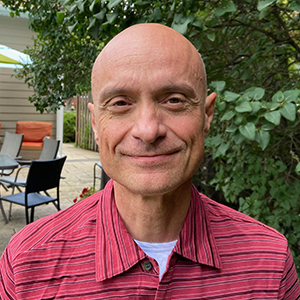 YFile asks the University’s community of changemakers to reflect on the past and consider the future.

Starting Sept. 9 and continuing throughout the publication’s anniversary year, YFile will ask University community members to reflect on York’s past and consider the future, specifically their thoughts on the continued evolution of York University. York is a community of dedicated employees, one is Paul Mayol, a York alumnus and a long-serving staff member, for his reflections.

How long have you been with York University and what has been the most striking change to the campus in that time?

I’ve been at York since 1981, first as an undergraduate student. I then started a grad program, but did not complete it. Finally, I have been an employee since 1986, and yep that’s a really long time! I’ve seen a lot of change in the built environment, that is obvious. As a student at the Keele Campus, I remember the underground tunnels, a pub in every college, the ramp to the Ross Podium and the enormous mound/round about that used to be part of what is now the Harry W. Arthurs Common in front of Vari Hall. There has been some type of construction on campus continuously since I was a student. I’ve seen many new buildings, a couple subway stations, the common, new student residences, roads and more. It’s been a frantic construction phase, but I do miss some of my favourite spots on campus that have disappeared to make room for new spaces. For instance, there was once one of the best family run restaurants in the basement of Atkinson College, and above it was the best vegetarian student-run spot on campus.

But I think what has struck me most over the more than 35 years I’ve been here as an employee, has been how York has evolved as a community. In my opinion, we have evolved as a mature institution committed to certain values that are the core of our identity. Today, our campuses reflect the multi-cultural and diverse identify of Toronto. We have become a very inclusive institution, grown our teaching and research, developed new Faculties, and new campuses. I feel truly privileged to have been a part of this journey of positive growth

What is your vision for York University looking ahead 20 years from now?

In terms of built space, if I’d been asked this question prior to the pandemic, I would simply have answered that York University will continue to grow, infilling, building academic and residential districts and following the Master Plan that has been the template for its physical development. I think that physical development will still take place, but perhaps at a different pace, and perhaps with different emphasis. I believe the growth will continue in terms of ensuring that this is a more diverse community, one that provides more access to post-secondary education to students from less advantaged families. I also see York becoming a more progressive employer. Academically, York will continue to mature by developing a new Faculty of Medicine, and creating new and innovative programs. But, like all educational institutions in the province, York will also need to tackle chronic and sustained underfunding, aging infrastructure and an increasingly competitive provincial and international market to attract and retain students.