The book, Transcultural Migration in the Novels of Hédi Bouraoui: A New Ulysses (published in 2021 by Brill/Rodopi in the Netherlands), analyzes the recurrent theme of transcultural migration, or immigration, in Bouraoui’s fiction. The protagonists in his works, states Sabiston, reflect his passion for endless travel, and are Ulysses-figures for the postmodern age. Their travels enable them to explore the “Otherness of the Other,” to understand and “migrate” into them.

Sabiston’s analysis goes on to state that Bouraoui’s world literature is rooted in the traversées of his characters across a number of clearly differentiated regions, which nonetheless share a common humanity. The ancient migrations of Ulysses, fueled by violence and war, are paralleled to the modern displacements of entire cultures and even nations. Bouraoui’s works bridge cultures past and present, but they also require the invention of language to convey a postmodern world in flux. 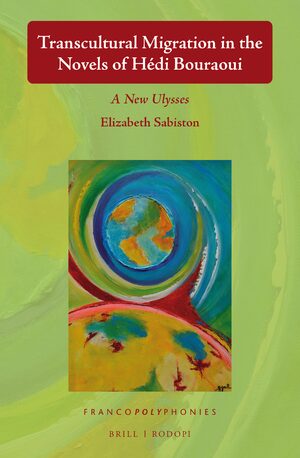 The book, says Sabiston, will be of interest to scholars, graduate and undergraduate students, and general readers in the fields of immigration, transculturalism, poetic fiction, francophone studies, postcolonialism and postmodernism.

Bouraoui is University Professor Emeritus of French Studies at York and Senior Scholar. He is a Member of the Order of Canada, Fellow of the Royal Society of Canada, and Officer of the Order of Palmes Académiques (France). As a former master of Stong College, and Chair of French Studies, he pioneered the study of transculturalism, or the building of bridges between peoples, not only in Canada, but globally. He is the author of over 20 poetry collections, numerous novels, essays, and literary criticism focusing on a plural francophonie. He has organized international conferences on such subjects as the Canadian identity, and creativity and criticism in francophone literatures. He is the founder of the Canada-Mediterranean Centre (CMC) at York, which is affiliated academically with the Department of French Studies (LA&PS).

Sabiston has previously published a book on Bouraoui’s earlier fiction, The Muse Strikes Back: Female Narratology in the Novels of Hédi Bouraoui (Sudbury: Human Sciences Monograph Series, 2005), as well as numerous articles on his poetry and fiction. She is also the author of The Prison of Womanhood: Four Provincial Heroines in 19th-Century Fiction (London: Macmillan, and New York: St. Martin’s, 1987), and Private Sphere to World Stage from Austen to Eliot (Hampshire, U.K., and Burlington, Vermont, 2008), recently reissued in paperback (Routledge, 2020). She is currently working on a book on Bouraoui’s poetry, as well as a book on Henry James. She is the director of the CMC, which publishes the online bilingual Revue CMC Review. In 2012 the CMC organized the international conference at York on Pluri-Culture and Migrant Writings: An Interdisciplinary Approach, supported by a generous Social Sciences and Humanities Research Council  (SSHRC) grant. In 2014 the proceedings were published by the Human Sciences Monograph Series, Sudbury, edited by Sabiston and Robert J. Drummond.