Underpinned by strong provincial, regional and municipal government support and reinforced by a traditional ceremony that took place in 2018 to formally acknowledge the traditional Treaty Lands and Territory of the Mississaugas of the Credit First Nation, construction on York University’s Markham Centre Campus officially began Sept. 22 with a groundbreaking event at the site for the $275.5-million project, expected to open in fall 2023. 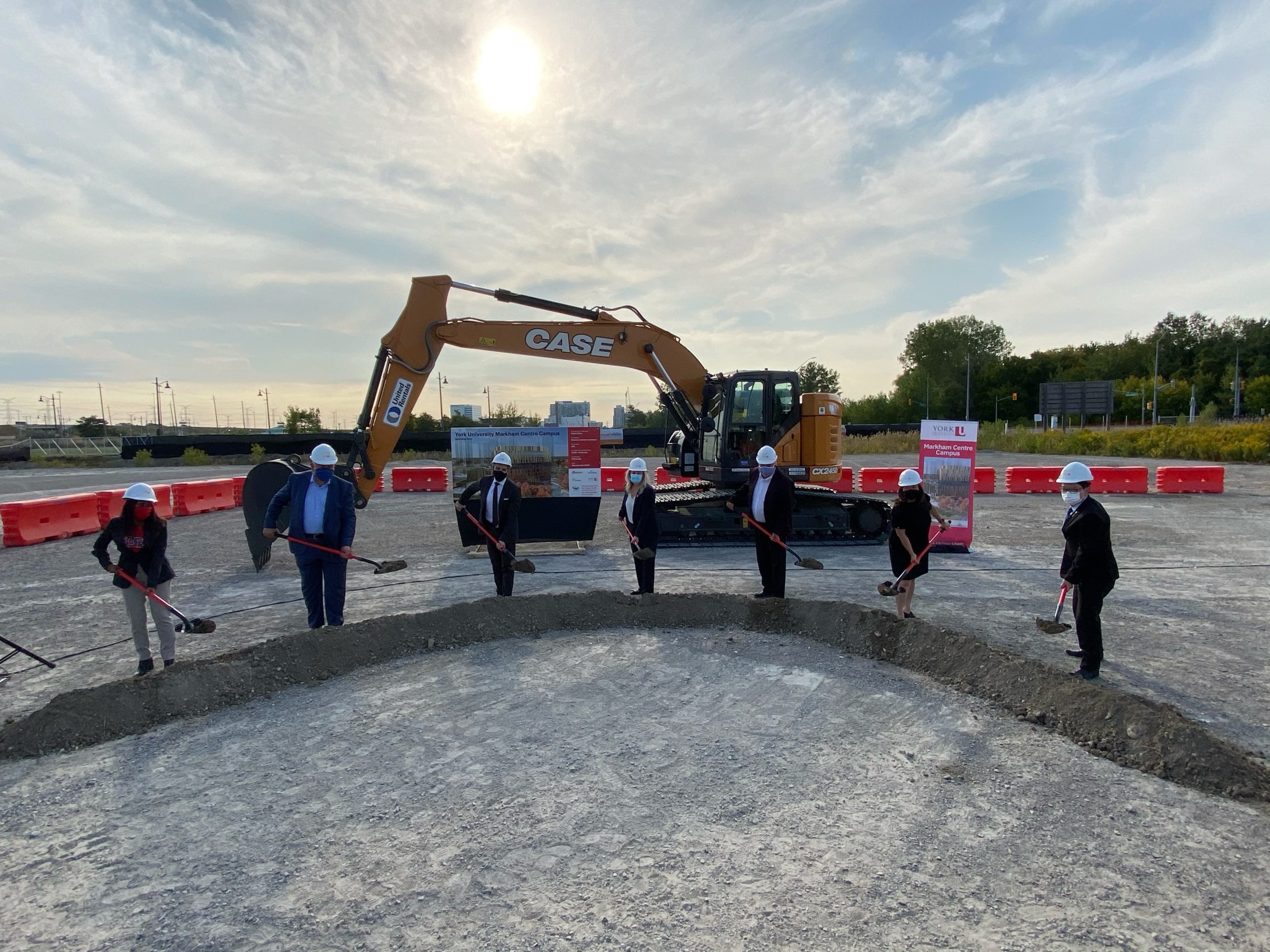 The official groundbreaking ceremony featured representatives from all levels of government and York President and Vice-Chancellor Rhonda L. Lenton (centre)

President and Vice-Chancellor Rhonda L. Lenton was joined by supporters of the project representing all levels of government. Present at the ceremony were: Minister of Colleges and Universities Ross Romano; Markham-Unionville MPP Billy Pang; York Region Chairman Wayne Emmerson; Markham Mayor Frank Scarpitti; and representing the federal government, Minister of Small Business and Export Promotion and International Trade and the MP for Markham-Thornhill Mary Ng.

The Ontario government announced its approval for the project in late July and site preparation work began immediately for the new campus, which will offer up to 4,200 students in the first phase a range of professionally relevant degree programs and micro-credentials.

York Region is projected to have the highest growth rate in Ontario in the 18 to 22-year-old population, increasing by 34 per cent by 2041, so Markham Centre Campus will offer students a university education close to home with work integrated learning opportunities in their communities.

“Through the new Markham Centre Campus, York University will be helping meet the future needs of York Region by offering innovative new programs, work-integrated learning and community-engaged research,” said Lenton. “By creating new opportunities for higher learning and entrepreneurship in the heart of one of Canada’s fastest-growing regions, the new campus will continue York’s longstanding role in building more prosperous, inclusive and resilient communities.”

The 10-storey, 400,000 square foot campus building, which will be located near the corner of Enterprise Boulevard and Rivis Road in Markham, was designed by Diamond Schmitt Architects. Construction manager on the project is Stuart Olson Ltd. The built form will be a five-storey podium with a five-storey tower above, clad in bronze-anodized aluminum, with welcoming and flexible indoor spaces and a Campus Green for outdoor gatherings.

“The Ontario government is pleased to support, through the updated Major Capacity Expansion Framework, York University’s new Markham Centre Campus,” said Romano.  “This new campus will help ensure the people of York Region have further access to higher education to prepare them for the jobs of tomorrow.”

Some of the milestones during construction include the following:

“The York University Markham Centre Campus will be York Region’s first public university and complements Markham's highly skilled, highly educated and diverse workforce,” said Scarpitti. “It will provide students with the necessary education, skills and training they need for the jobs of the future, and will provide them with workplace-based learning opportunities while they study in collaboration with local information and communication technology (ICT) companies. This will strengthen our position as a hub for innovation, while driving the prosperity of the Province, York Region and the City of Markham.”

York University introduced a comprehensive Social Procurement Policy in January to reflect its values of equity, inclusivity and social justice by ensuring that projects such as the Markham Centre Campus support local economic and social development. The University is inviting organizations to register as a Diverse Vendor or Social Enterprise to supply goods and services for the construction of the new campus.

“Supporting and attracting post-secondary education and research opportunities has long been a priority for York Regional Council. As one of the largest business communities in Ontario and Canada’s second largest tech hub, York Region is where talent and opportunity intersect,” said Emmerson. “Together, with the Government of Ontario, York University and the City of Markham, we are strengthening opportunities for students and showcasing York Region as a destination of choice for higher learning.”

New programs to be offered at the Markham Centre Campus will feature a blend of technology and business. Degree programs and microcredentials will be part of the programming offered. Students will also have the opportunity to engage in strong experiential learning in high demand areas such as digital technologies, business, entrepreneurship, new media, communications and data analytics.

Public, private and government partnerships and a focus on learning that provides students with essential real-world skills will be part of the DNA of the new Markham Centre Campus. Innovation York and the University's community innovation hub, YSpace, are already firmly rooted in Markham and York Region, and in 2019, academic programming in Markham began in the IBM Canada headquarters.