Why is there an abundance of matter compared to antimatter in the Universe? This question has stymied physicists for years, but researchers at York University, along with other Canadian institutions as part of the international Tokai-to-Kamioka (T2K) Collaboration, have found neutrinos may hold the answer.

The international T2K experiment is aimed at unraveling this matter-antimatter conundrum by studying neutrinos, subatomic particles produced in huge numbers immediately after the Big Bang. They come in three types – electron, muon, and tau neutrinos – and are created in stars, inside the earth, the atmosphere and at accelerators, such as J-PARC in Japan, where the T2K experiment is conducted.

To tackle this puzzle, the T2K team, including York University Faculty of Science physics Professor Sampa Bhadra, the project leader for the optical transition radiation (OTR) detector for the experiment, was looking for behavioural differences of neutrinos (matter) and antineutrinos (antimatter) as they change states during flight into electron neutrinos and electron antineutrinos, respectively.

If matter and antimatter exhibit the same behaviour, charge-parity symmetry implies that the laws of physics are the same for matter and antimatter. But this doesn’t appear to always hold true. For example, there is way more matter than antimatter in the Universe. To account for the observed level of asymmetry, researchers believe there must have been a violation of charge-parity symmetry in the early Universe initiated by neutrinos.

T2K team found the strongest indication yet of this violation in charge-parity symmetry between neutrinos and antineutrinos, but more work is needed to definitively prove it.

The results, published in the journal Nature, are a major step forward in the study of what caused the original difference between matter and antimatter.

“Neutrino transformations are a beautiful way to study the matter-antimatter asymmetry in the Universe,” says Bhadra, who is also a TRIUMF affiliate scientist. “What can be more exciting than studying a particle that may hold the clue to our very existence?” 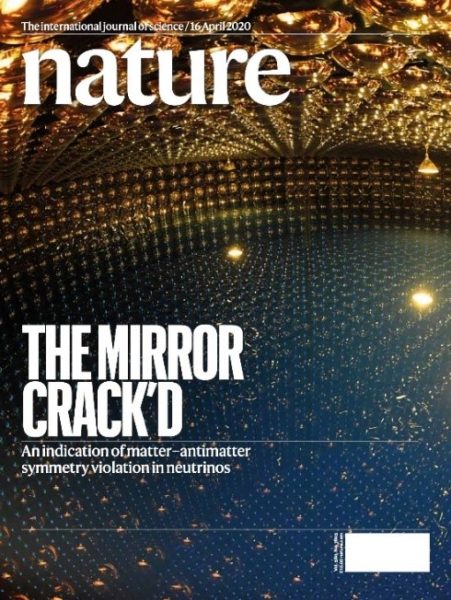 The T2K experiment used a beam consisting primarily of muon neutrinos or muon antineutrinos created using the proton beam from the Japan Proton Accelerator Research Complex in Tokai, Japan.  A small fraction of the neutrinos (or antineutrinos) are detected 295 km away at the Super-Kamiokande water Cerenkov detector in Kamioka, Japan. Previously, T2K studied how the original neutrinos (antineutrinos) transition or oscillate into electron neutrinos (antineutrinos) as they traverse the distance from Tokai to Kamioka (hence the name T2K) in a process called “neutrino oscillations.” This was the subject of the Nobel Prize in Physics in 2015.

The T2K collaboration consists of close to 500 scientists from 12 countries, including Canada. The Canadian effort provided some of the most challenging and critical detectors of the project – the time projection chamber, the fine-grained calorimeter and an OTR detector – and contributed to the success of T2K through key leadership roles.

“Canadian scientists look forward to building on the success of the T2K experiment to realize even more precise measurements of neutrino oscillations through upgrades of the experimental apparatus,” said TRIUMF Professor Mark Hartz, the corresponding author on the paper, former research associate at York, and leader of the Canadian-led Intermediate Water Cerenkov Detector project.

Bhadra says, “York will continue to be involved in neutrino physics with more sensitive neutrino experiments being built in the future that will surely provide an answer to the question: what happened to the antimatter?”