This year, alumnus Jim Cassimatis, interim associate deputy minister of ServiceOntario, delivered the keynote address. Cassimatis reflected on his public service career, offering a candid account of some of the challenges he experienced over the last three decades. From technology to ethics, the public service tackles a constantly evolving set of realities in its mandate to deliver on commitments that politicians have made to the public, he said.

Cassimatis has devoted his career to the implementation of government programs and services. He offered advice to students and more junior alumni, noting that first, sound budgeting and management are essential for successful program delivery; second, learning the intricacies of program delivery takes time; and third, it is important to move laterally to gain exposure to different functional roles in the public service to appreciate the complexities of implementation.

He also cautioned junior colleagues against rushing to move up the career ladder prematurely, as risks are inevitable in the face of steep learning curves and the need to build one’s leadership capital.

The first award presented at the dinner celebrated public service excellence and leadership. The 2019 year marks the 10th anniversary of the first graduating class of the school’s Master of Public Policy, Administration and Law (MPPAL) program, and on this occasion the School’s Alumni Network – YUSPPAAN – established the Foster – Greene Award for Excellence in Public Policy, Administration and Law. The award is named after the MPPAL program’s inaugural graduate program directors – University Professor Emeritus Ian Greene and Professor Lorne Foster – and recognizes an alumnus/alumna of the MPPAL program whose work has demonstrably and significantly advanced social justice, human rights, ethics and good governance in congruence with the program’s founding principles. The award recipient will normally have a minimum of 10 years of work experience in the broader public sector.

YUSPPAAN Board Member Kevin Giddings (MPPAL ’15) championed the establishment of the award and presented it to its inaugural recipient, Amuna Baraka-Clarke (MPPAL,’18). Baraka-Clarke’s career spans three decades in the non-profit sector, including 15 years at senior leadership level. She currently holds the position of director of human resources and operations for the Jane/Finch Centre. In this role, she strengthens organizational structures and practices through strategic human resources interventions and the engagement of policy. She is also a 2019 CivicAction DiverseCity Fellow and sits on various boards, including the newly engaged York University Black Alumni Network.

The School also recognized the contributions of two public sector partners for the practicum opportunities they provided to our fourth-year Bachelor of Public Administration (BPA) students. Professor Peter Constantinou, the school’s experiential education coordinator, highlighted the championing roles of: alumnus Claudio De Rose (BA spec. hon. PPA ’98), acting executive director, driver and vehicle program development and modernization in the Road User Safety Division of the Ontario Ministry of Transportation; and Louise Simos, who currently leads a team responsible for ServiceOntario’s intergovernmental relations and data services at the Ministry of Government and Consumer Services. Simos recently received the highest award in the Ontario Public Service (OPS) – an Amethyst Award – for digital disruption and for an innovative new intranet for the 60,000-plus OPS employees. 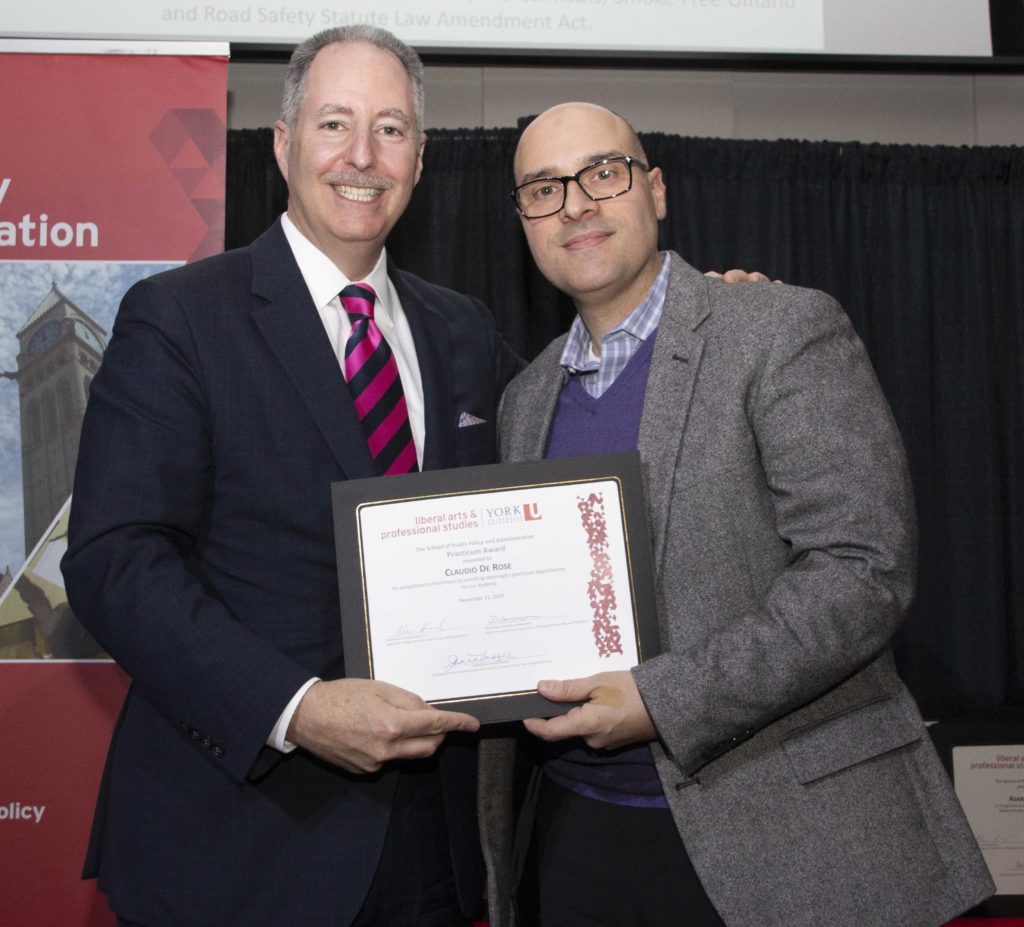 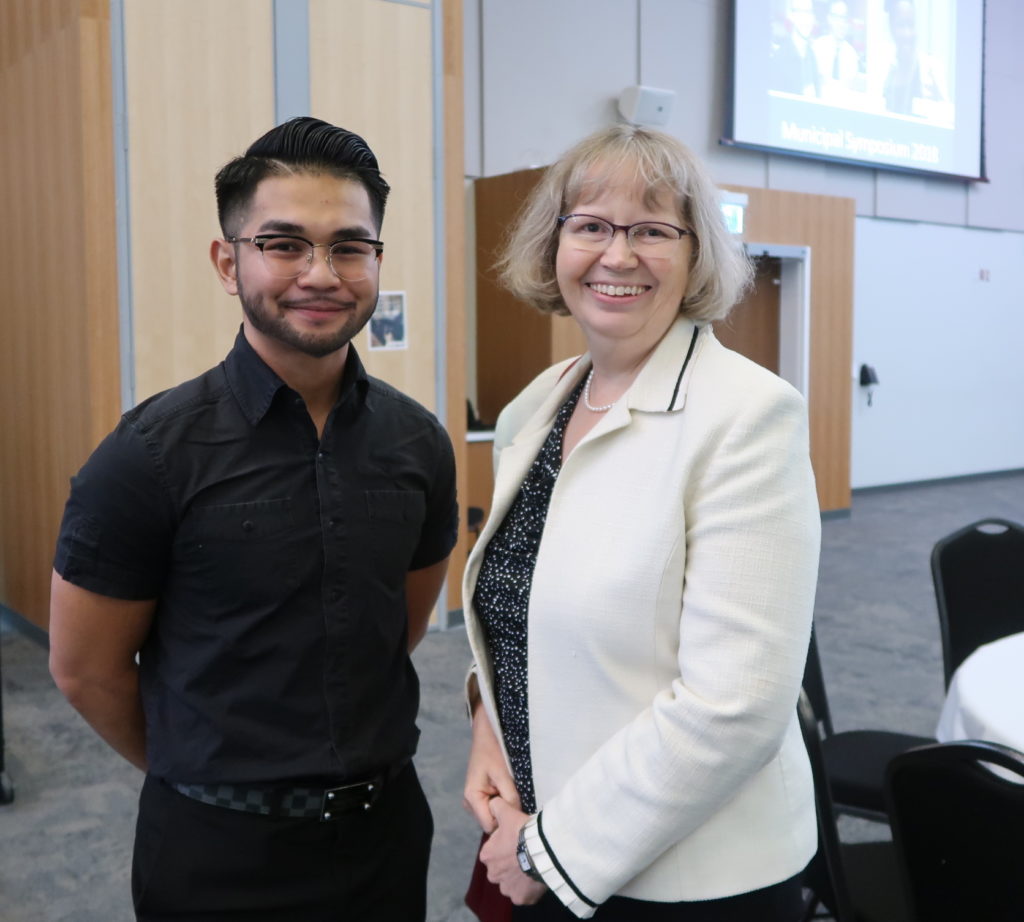 Several other awards were presented to students and alumni, including:

The Undergraduate Student Award presented to Sukhpreet Singh from the BPA spec. hon. (management stream) program (class of ’19) for his leadership and service to the Public Policy and Administration Student Association (PPASA) in a variety of roles for three years and most recently as president in 2018-19.

Singh joined the federal public service in May as an access to information and privacy analyst at the Treasury Board of Canada Secretariat, and expressed his gratitude at the dinner to his parents, and SPPA faculty and staff for their support during this journey.

The Graduate Student Award was presented to Tiago De Oliveira for his service as director of communications for our Graduate Students’ Association during the first year of his MPPAL studies in 2018-19, and contributions to organizing a career panel for students, the school’s municipal symposium and several networking events.

De Oliveira currently holds the position of payroll transformation project lead with the City of Toronto. He is a graduate of our BPA spec. hon. program (law, justice and public policy stream, class of ’14) and also holds a certificate in human resources management from York.

The Best 2019 Major Research Paper Award was presented to Ryan Clancy (MPPAL, class of ’19) for his research on the City of Toronto’s response to gun violence. MPPAL Director Dagmar Soennecken served as Clancy’s research supervisor and highlighted his background and aspirations combining a bachelor of commerce, chartered professional accounting (CPA) designation and commitment to social justice in line with York’s and MPPAL values.

Clancy recently transitioned from the OPS to LIFT Philanthropy Partners as the senior manager, impact investing with emphasis on social finance and impact. He also serves as vice-chair of the Board of Regeneration Community Services, a not-for-profit that provides housing support for persons with mental health and addiction challenges.

MPPAL students Rebecca Ganesathas, Joana Jabson, Asare Kester-Akrofi, Sindiswa Moyo and Gurjeet Virdi were presented with the Best Team Award for their participation in the 2019 IPAC-CAPPA National Case Competition. Soennecken also acknowledged the work of the team’s long-standing coach John Wilkins, and MPPAL student Richard Mohammed was named honorary member of the team for his unparalleled dedication and constructive support of the team at every tryout. 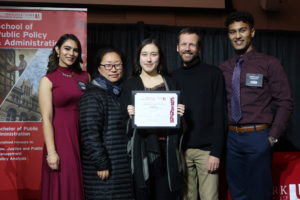 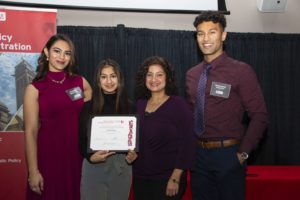 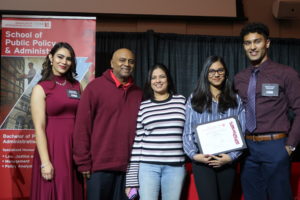 Undergraduate Program Director and Professor Joanne Magee and Gurkamal Dhahan, president of the PPASA, presented the awards to this year’s winners of our high school essay contest for sharing their thought-provoking Vision for Canada:

The evening concluded with the presentation of two alumni awards by SPPA Director Alena Kimakova:

The Emerging Leader Award was presented to Shireen Salti (MPPAL, class of ’17) who was recently named the executive director of the Canadian Arab Institute, a national not-for-profit, non-partisan organization that focuses on issues and interests of the Canadian Arab community through research, education and community engagement. The institute strives to be the leading policy and research organization on domestic policies of concern to Arab Canadians. Salti has held various positions with the Ontario Public Service, the Ontario Legislature Internship Programme and the Council of Ontario Universities. In 2017, Salti received both the school’s Graduate Student Award for her contributions to student life and the Best MRP Award in the MPPAL program for her major research paper on the settlement of Syrian refugees in Toronto.

The Alumni Recognition Award was presented to Ashley Cabral (MPPAL, class ’17) for her exceptional dedication to creating professional development opportunities for our students and alumni, as well as leadership and strategic vision for our alumni network. Cabral juggles a hectic schedule as executive advisor to the assistant deputy minister of the Ministry of the Solicitor General, Chair of YUSPPAAN and board member and the New Professionals Lead of the Institute of Public Administration of Canada (IPAC). She is also the recipient of the 2017 SPPA Emerging Leader Award. Her commitment to service excellence and visionary leadership to achieve client-centered, outcome-focused service delivery transcend all areas of her work and are assets to the alumni network and the school.

The evening was moderated by BPA alumna and 2017 recipient of the University-wide Robert Tiffin Student Leadership Award Munisha Basiram. In attendance were also Associate Dean Students Peter Avery of the Faculty of Liberal Arts and Professional Studies (LA&PS) and Tony Haddad, who recently joined the school’s Advisory Committee after a distinguished career in the municipal public service. The event was supported by Nicole Glassman of the LA&PS communications team and SPPA staff members Maria Flores, Jasmattie Jewan and Shakira Bacchus.