The second instalment of a four-part seminar series will investigate the relationship between building models of brains and building computational systems.

Titled “The Biological Imitation Game; Or the sublime similarity of brain simulation,” the seminar will be held Nov. 8 from 12 to 2 p.m. as part of the Neurological Imaginaries Seminar Series, co-hosted by York University’s Neuroscience and Science & Technology Studies graduate programs. 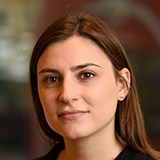 Tara Mahfoud will present this talk based on her paper of the same name. In it, she explores how the history of building models of brains is intertwined with the history of building computational systems – from Alan Turing’s thinking machines to cybernetic brains and, more recently, the use of experimental and theoretical neuroscience in the development of Google DeepMind’s AI techniques.

Mahfoud’s paper states that many in the social studies of science have argued that the rise of computational approaches in the neurosciences – as evidenced by investments into big neuroscience projects in the EU, the U.S., Japan, Korea and Australia – may not only change neuroscientific practices, but also modify computational metaphors of brain and mind. She asks, “How are neuroscientists building models of brains? How do they assess how well they have reproduced the individual neurons they are reconstructing in silico and the behaviour of neural networks they are simulating?”

Based on ethnographic fieldwork in a computational neuroscience laboratory in Switzerland between 2014 and 2015, Mahfoud demonstrates the centrality of vision to debates about the validity of brain simulations. Neuroscientists’ successful simulation of excitable neurons is sublime – it frightens them as much as it excites them. But, in reproducing nerve cells, they highlight the limits of machine vision and machine intelligence. In these laboratories, the brain is re-inscribed, over and over again, as a computational machine – but one that is very different to the machines they seek to build.

Mahfoud is a research associate in the Department of Global Health & Social Medicine at King’s College London. She is an anthropologist of science, technology and medicine interested in the cultural, social, political, and clinical contexts and implications of developments in the neurosciences in Europe.

The Neurological Imaginaries Seminar Series brings neuroscientists, anthropologists and artists together in an interdisciplinary conversation to discuss epistemological tensions within traumatic brain injury care (supported with a Social Sciences & Humanities Research Council Insight Development Grant). These conversations, papers and installations explore how sensorial and arts-based methodologies might open up possibilities for understanding often imperceptible inner transformations that escape both biomedical technologies and language.

The Nov. 8 seminar will be followed by a live interview and a Q-and-A period. Light refreshments will be provided. It takes place in York Lanes 280N. All are welcome.