More than 4,000 students (corrected number) at York received an official welcome to the University. The first-year students and their Orientation leaders were the guests of honour at a special event held Sept. 3 in the York Lions Stadium on the Keele Campus. The University rolled out the red carpet, red Lions T-shirts, red and white fireworks and more. 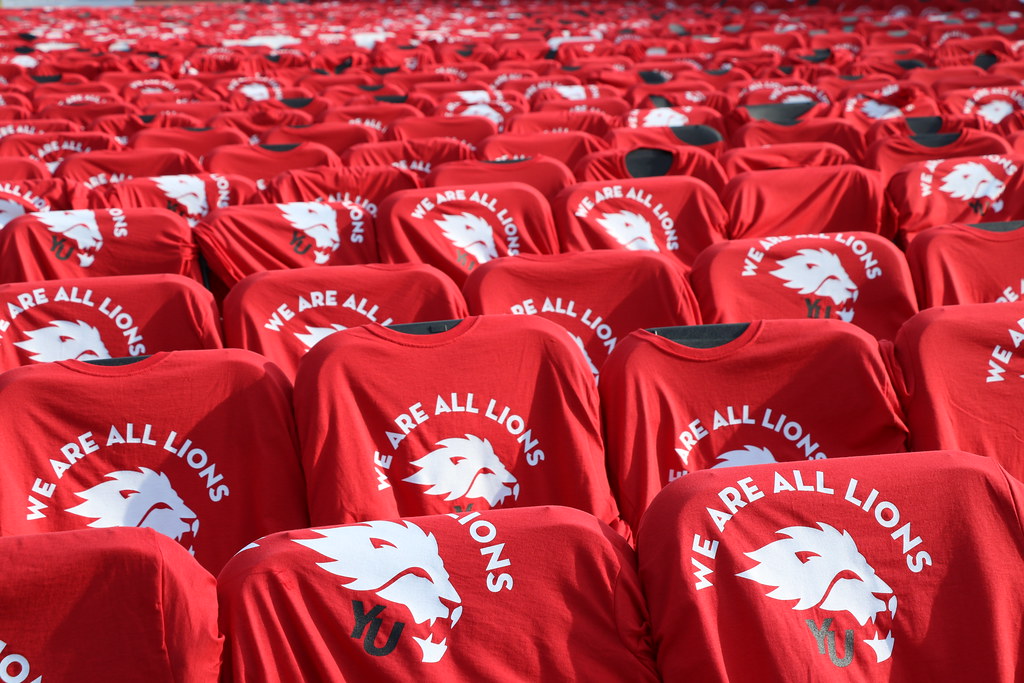 Welcome Day is an annual tradition at York University and is one of the highlights of Orientation week. A blend of academic and social orientation, Welcome Day helps first-year students transition to life at the University. In a carefully curated academic program, first-year students met others in their cohort and senior students in their programs. They learned all about how to succeed in their studies, the myriad of supports available to them and they heard from peer mentors and their program professors. Tours were also an important part of the day and students were encouraged to explore the University and find their classrooms.

The official ceremony began at 6 p.m. with a parade of students into the stadium. Wearing their college colours and led by their Orientation leaders, the groups cheered and danced. They were then welcomed by representatives from the York Federation of Students and the Aboriginal Students’ Association at York University.

Following the official land acknowledgement of the Indigenous lands of the Keele and Glendon campuses, the Red Spirit Singers and Drum Group offered a moving First Nations welcome.

Students were then invited to participate in a new student convocation led by York University President and Vice-Chancellor Rhonda L. Lenton. Senior members of the University’s academic leadership, accompanied by two bagpipers, entered the stadium for the new student convocation, which officially welcomes the entry of first-year students to the University. Lenton announced that first-year School of the Arts, Media, Performance & Design student Haley Crespo was the winner of the “Free Tuition for One Year” contest.

The event continued with the presentation of a one-act play titled There Is No Maybe: A Play about Sex and Consent. The live performance featured the actors from York University’s acclaimed Vanier College Productions. There Is No Maybe explores the important issues surrounding consent on campus between university students and with respect to intimacy, if it is not clear, and it is not enthusiastic, it is not consent.

The play combats rape culture and teaches students what their options are when confronted with issues surrounding sexual violence. Staff in York University’s Centre for Sexual Violence, Response, Support & Education (The Centre) worked with Vanier College Productions to ensure the play involved cases of sexual violence that can happen on any university or college campus or in any situation. The play offered insight into gender, equality, the #MeToo movement, historical incidents and flashbacks as well as the many ways students could support and/or intervene in situations. It was received with loud applause by the students. Actors spoke from the heart and outlined the many supports available to students.

The first-year students and their leaders were treated to singing and dance performances.