The recipients of the 2018 President’s Staff Recognition Awards

More than 150 members of the York University community gathered on June 5 to celebrate some of the University’s most dedicated, hard-working and enthusiastic staff members during the annual President’s Staff Recognition Awards.

Not even the rainy, foggy skies could put a damper on the jovial mood during the awards dinner, held in the Avani Event Centre, when York President and Vice-Chancellor Rhonda L. Lenton formally announced the award recipients. 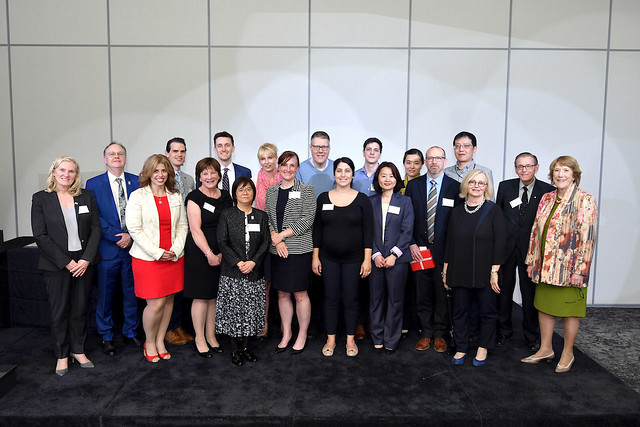 Lenton marked the occasion by sharing her pride for the York University staff, making special note that the staff makes significant contributions to the success of the University.

“It is fundamentally the staff that keep this place running … we are always struck by how completely committed our staff are to the success of the University – to our students, first and foremost, but also to our faculty and to each other,” she said in her opening remarks. “We would not thrive in the way we do without all of the compassion and vision and leadership that all of you have exhibited.”

She commended staff for advancing the University’s vision, making an impact in advancing York’s priorities, and representing the best of the community’s values and ideals.

The recipients of the 2018 President’s Staff Recognition Awards are:

Each award announcement was complemented by video footage that captured how each recipient was informed of their award. In every instance, the awards team sent the York University Lions mascot Yeo to share the news. The scenes played out with great comedy and surprise, and followed with a few words from each recipient and their colleagues.

At the conclusion of their individual video segments, award winners were invited up to the podium to receive their gifts and share a few words.

Greg Langstaff, who in his role leads the transition experience for students entering the University, was recognized as an emerging leader with tremendous team-building capacity.

He was noted as someone who consistently tries to push the University forward, and works to inspire others.

He took a moment to thank his nominators and his team, and earned a few laughs when he ended his speech with a sincere “Thank you all for clapping, that was really nice.”

Maureen Barnes is a long-standing citizen of the University, and was lauded for dedicating her career to designing, implementing and trying to anticipate student needs.

She is viewed as innovative and creative, and as someone who fosters a community on campus for students with disabilities.

After receiving the award, Barnes spoke of the importance of working as part of a team and making connections across campus. “To me, citizenship is being part of a team … the community that you build around you is critical to your ability to grow, learn, support and achieve the kinds of things that truly matter.”

Terry Wright was highlighted as always having the greater York community in mind and caring deeply about the University.

Wright said he was overwhelmed when reading the letters submitted by his nominees. He also gave a nod to his colleagues: “Throughout my career, I’ve been so fortunate to work with such dedicated faculty and staff – it inspires me every day.”

Patricia Gagliardi-Ursua is collegial, friendly, outgoing and positive, said colleagues, and is highly regarded in the University community.

She was recognized as someone who creates a culture of collaboration and has a breadth of experience and knowledge.

Gagliardi-Ursua said she’s motivated to make York a positive environment because people matter. “What an amazing place York is when it allows us the opportunity to meet awesome people that touch our lives and make them better – we here at York are a team, and if there’s anything I can do to help, I really am willing to help.”

Cameron Rogers will leave a legacy at York through leading and implementing the SHARP budget model, said colleagues. In addition to contributing to a transformational project for the University, Rogers was also highlighted as someone who promotes collegiality and advocates for people across campus.

He was noted as having a quiet but immensely influential leadership style and consistently exceeding expectations.

Rogers said it was heartening to read the nomination letters. “It’s a great honour to be the recipient of this award – especially when I reflect on the amazing colleagues I work with across the University who are equally deserving.”

The team is noted for its expertise in analyzing data, but also for exploring big-picture questions and ideas.

“It’s an absolute pleasure coming to work every day and being part of a team who really wants to do better, face challenges and put a smile on everyone’s face,” said Sarah Cantrell, assistant vice-president of the Office of Institutional Planning & Analysis (OIPA).

Jenny Pitt-Clark, who has led and transformed how York celebrates its excellence through her work on yFile, the University’s journal of record, was praised for her commitment to supporting and promoting the success, the character and the spirit of York.

Through her research and storytelling, she has created a publication that was described as “York’s own Wikipedia” and “a must-read for everybody.”

Pitt-Clark said the award was a tremendous honour. “I am very privileged to be in this role because I get to be a storyteller. I talk to fantastic people each and every day,” she said. “I have the best job in the world.”

Lenton concluded the evening with a final congratulations to the nominees and award recipients, and invited Carol McAulay, vice-president finance and administration, to offer a toast.

“Thank you … you are wonderful members of our wonderful community,” she told the recipients.