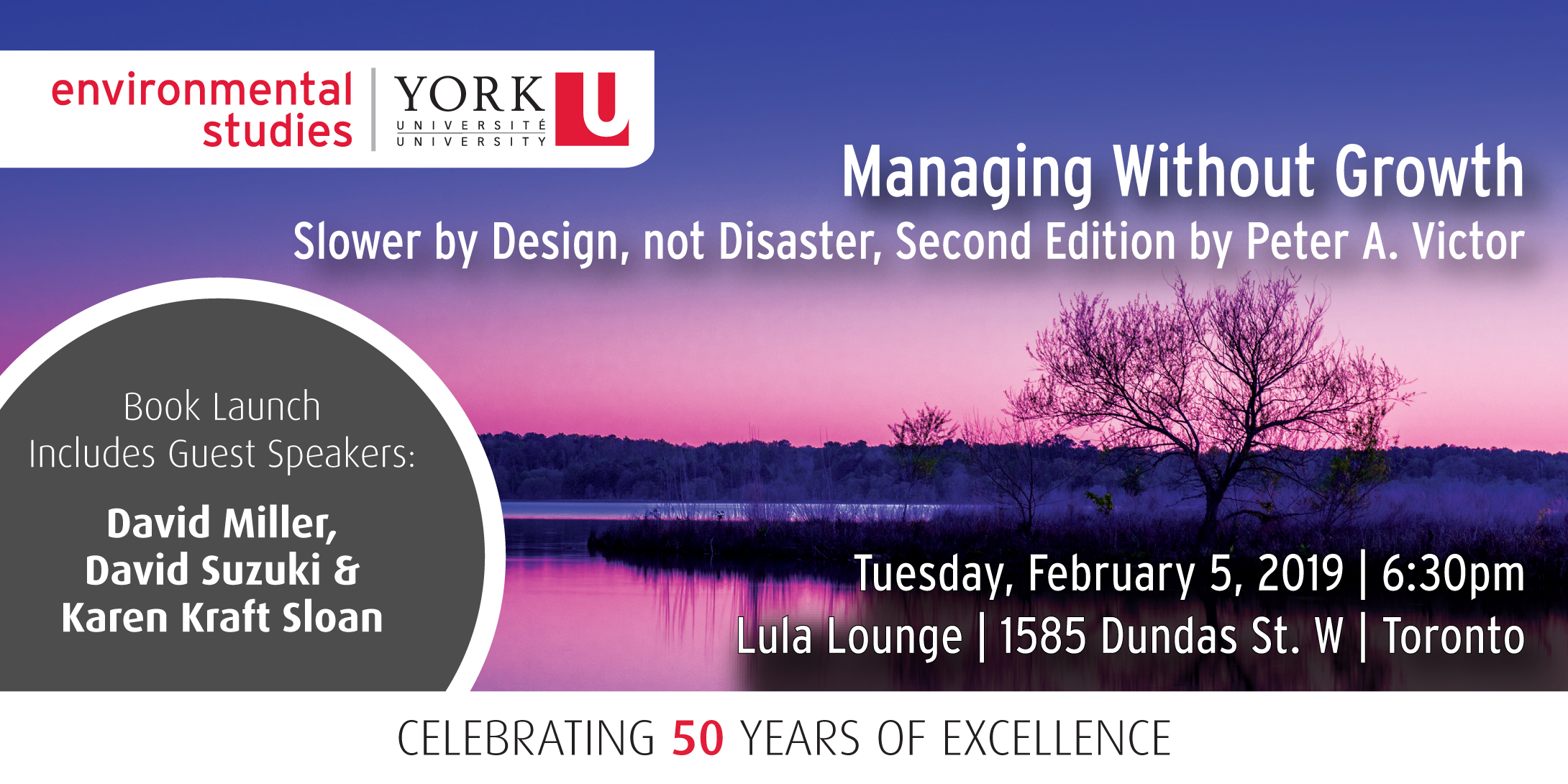 The second edition of a highly regarded book by York University Professor Emeritus Peter Victor that examines why long-term economic growth is infeasible will be celebrated during a book launch event on Feb. 5.

Victor, who taught in the Faculty of Environmental Studies (FES), has released Managing without Growth: Slower by Design, not Disaster (second edition) after the release of his highly regarded first edition 10 years ago.

The launch, which will include special guests David Miller, David Suzuki (live on video) and Karen Kraft Sloan, is part of the 50th anniversary celebrations for FES.

Since the highly regarded first edition was published a decade ago, the possibilities for a smooth transition to a sustainable economy have diminished. The relevance of the updated and expanded information, analysis and arguments in Managing without Growth is greater than ever.

The book explains why long-term economic growth is infeasible, and why, especially in advanced economies, it is also undesirable. Simulations based on real data show that managing without growth is a better alternative.

The book tells how the recent idea of economic growth emerged from the idea of progress, itself only a few hundred years old. Many reasons for questioning growth are given based on an extensive review of the data as well as on conceptual and methodological considerations. The experience of growth in several countries is documented, compared and found wanting.

Possibilities for managing without growth in high-income economies are simulated with a new, comprehensive systems model with many novel features. Three 50-year scenarios are compared: a base case, an ambitions greenhouse gas reduction scenario and a sustainable prosperity scenario with broader environmental economic growth. The book closes with a review of policies to make this scenario a reality.

This updated book is a valuable resource for a broad academic audience, including students and researchers in economics, environmental studies, environmental science, business studies and geography, as well as social justice groups and NGOs concerned with the environment, inequality and employment.

Victor was a professor in FES at York University, and from 1996 to 2001 he was dean of FES. This followed several years as assistant deputy minister of the Environmental Sciences & Standards Division in the Ontario Ministry of the Environment. Prior to that, he was a principal of VHB Consulting and Victor & Burrell Research & Consulting, where he undertook many influential policy-related economic studies in Canada and abroad.

All are welcome to attend this complimentary book launch event. Doors open at 6:30 p.m. and the event begins at 7 p.m. The only way to guarantee a seat at the venue, the Lula Lounge, is to make a reservation by calling 416-588-0307 or online at lula.ca. A full menu will be available for guests to purchase food and beverages.