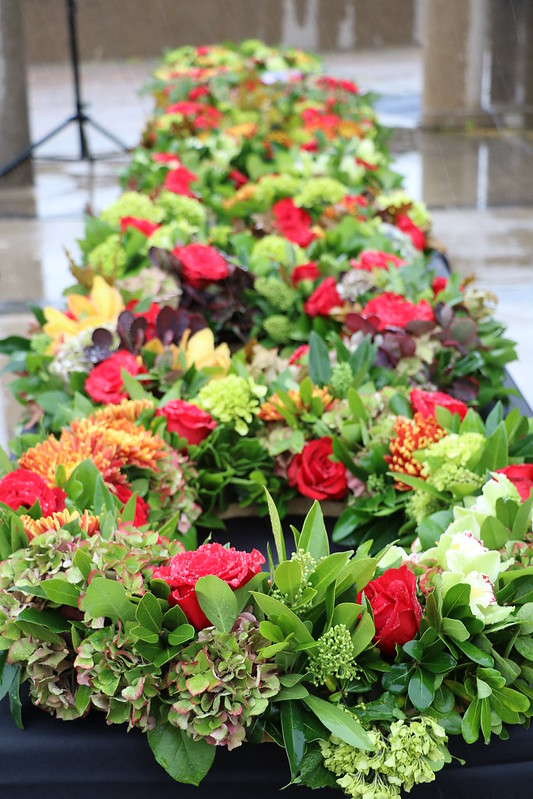 Several hundred students, faculty and staff joined veterans and reservists from the armed forces to brave the pouring rain, snow and cold wind for Remembrance Day ceremonies on the Keele and Glendon Campuses. They were at the ceremonies to remember the bravery of Canadian and Indigenous veterans and those who lost their lives while fighting for the freedoms we enjoy today.

Remembrance Day honours the men and women who were killed during the two world wars and other conflicts and pays tribute to veterans. Previously known as Armistice Day, it was renamed Remembrance Day after the Second World War.

The Keele and Glendon Campus communities gathered for a quiet ceremonies with community members and veterans taking roles in each ceremony. The terrible weather prevented the lighting of the ceremonial fires, so community members were encouraged to make an offering of tobacco, which would be burned once the weather cleared.

Both events included recognition of the history of the role played by Indigenous Peoples who have answered the calls over the years. Moving tributes were paid to veterans through poetry, song and ceremonial laying of wreaths of remembrance and the singing of “O’Canada” and “God Save the Queen” by the York students.

The 11th hour of the 11th day of the 11th month marks the signing of the armistice – on Nov. 11, 1918 – that ended the First World War. This year marks the 100th anniversary of that eventful day. At 11 a.m. that day, the guns on the Western Front fell silent after more than four years of continuous warfare. More than 66,000 Canadians were killed in the First World War and more than 172,000 were wounded.