Thousands of first-year students accompanied by their Orientation leaders gathered in the York Lions Stadium Tuesday night to take part in the 2018 Welcome Ceremony. The event, which took place on the Keele Campus, was York University’s official greeting to its newest students.

Welcome Day and the accompanying evening ceremony are key events in York University’s Orientation Week. The Welcome Day activities help first-year students transition to life at the University. As part of the day, first-year students met others in their cohort and senior students in their programs. They also heard from peer mentors and their program professors and explored the University, signed up for clubs and took part in some organized academic orientation activities.

The official ceremony began at 6 p.m. with a parade of students into the stadium. Wearing their college colours and led by their Orientation leaders, the groups were challenged to loud and raucous cheering by York Federation of Students Vice-President of Equity Aminat Arigbabu and Vice-President of Campus Life Anthony Fernandes, who served as the event’s MCs.

After everyone was seated, the ceremony continued with the University’s official acknowledgement of the Indigenous lands of the Keele and Glendon Campuses and a welcome from Stefan Piercey, president of the Aboriginal Students’ Association at York, and Indigenous student leaders from the both campuses. Following their greetings, the Red Spirit Singers and Drum Group performed a traditional First Nations welcome.

The event continued with the presentation of a one-act play titled There Is No Maybe: A Play about Sex and Consent. The live performance featured the actors from York University’s acclaimed Vanier College Productions. There Is No Maybe was written by Kristen Da Silva, Katie Edwards, Alisse Lee Goldenberg, Brian Goldenberg and Theresa Noon-Hunter. It explores the important issues surrounding consent on campus between university students and with respect to intimacy, if it is not clear, and it is not enthusiastic, it is not consent.

The play combats rape culture and teaches students what their options are when confronted with issues surrounding sexual violence. Staff in York University’s Centre for Sexual Violence, Response, Support & Education (The Centre) worked with Vanier College Productions to ensure the play involved cases of sexual violence that can happen on any university or college campus or in any situation. The play offered insight into gender, equality, the #MeToo movement, historical incidents and flashbacks as well as the many ways students could support and/or intervene in situations. It was received with loud applause by the students. Actors spoke from the heart and outlined the many supports available to students.

The first-year students and their leaders were treated to singing, dance and hip hop performances, and the winners of the York Lions hoodie contest were announced.

To complete the Welcome Ceremony, members of York University’s academic leadership, accompanied by two bagpipers, entered the stadium for a new student convocation, which celebrates the entry of first-year students into University.

York University Vice-Provost Students Lucy Fromowitz delivered the opening remarks. She was followed by Provost and Vice-President Academic Lisa Philipps who spoke to students about making the most of their time in university. Then Maureen Armstrong, the official platform party marshal and York University secretary and general counsel, delivered the new student convocation induction to welcome the first-year students into the University.

The evening wrapped with a display of fireworks.

For more on the day and the student reactions to York University, see #WeAreYU on Twitter. 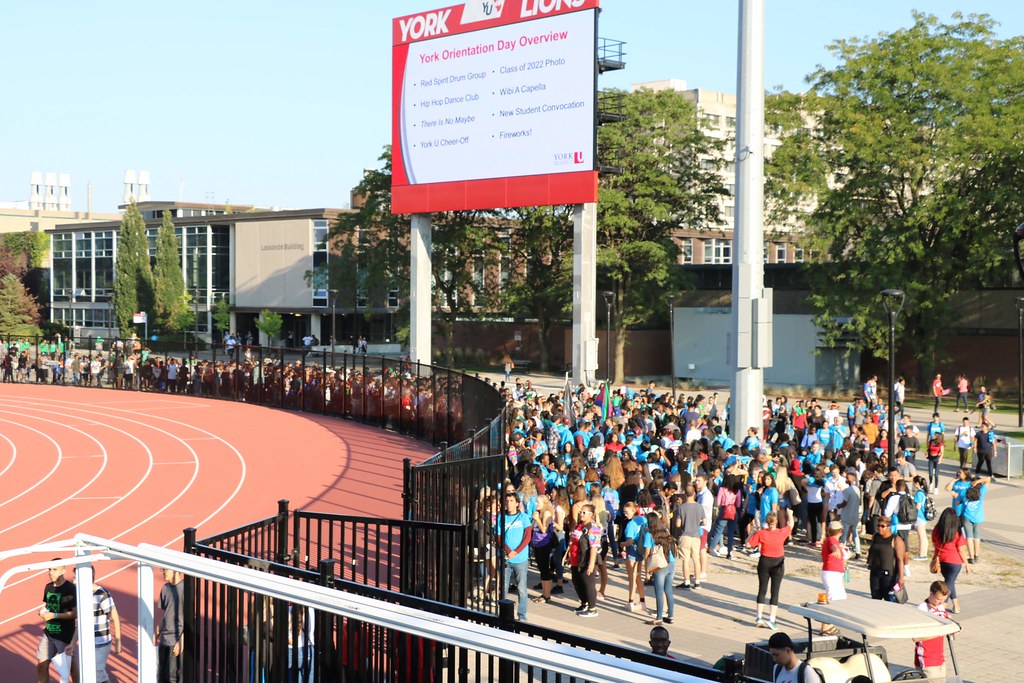