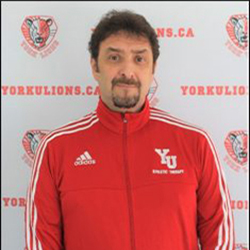 A collaboration between York University and Karate Canada continues to be strong, with faculty, alumni and students serving different roles with the corporation.

Professor Gus Kandilas, from the School of Kinesiology and Health Science in the Faculty of Health, was named Karate Canada’s sports medicine director in 2014, and continues in that role. Kandilas, the Athletic Therapy Certificate Program coordinator at York, is the first non-physician to hold this role, and oversees the medical teams and medical board for Karate Canada.

Kandilas has travelled with Karate Canada most recently to Curacao for the Senior Pan AM Championships this past spring, and was at the Senior World Championships in Bremen, Germany in 2014. He was one of the medical leads for Combative Sports (Karate) at the Toronto Pan AM Games in 2015.

Richard will be travelling with Karate Canada in a few weeks with the junior national team for the World Junior Championships to Tenerife, Canary Islands, and has travelled with the Junior National team since 2015.

Lindsay-Ng has worked extensively with taekwondo as well as karate, and is a former national team member on the Canadian Taekwondo team. She was the athletic therapist travelling with the senior national team to the Karate World Championships in Austria in 2016, and was part of the medical team for Karate and Combative sports at the Pan Am Games in Toronto in 2015.

Students and alumni from York are also part of the national and junior national team competing for Karate Canada, including Nassim Varasteh-Reyhanian, a York alum who serves as one of the head coaches of the senior national team.

Karate Canada is a corporation with the objective of describing and incorporating all activities related to the promotion, organization, regulation and popularization of the sport of karate all over Canada, and for protecting the physical and emotional health of athletes and promotes the interests of karate throughout Canada.

In these upcoming Olympic games in Japan (2020), said Kandilas, Karate will be an exhibition sport.