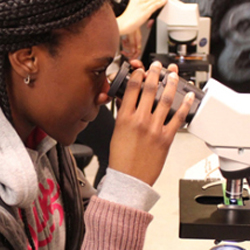 Campers get full exposure to a full range of science activities

This summer, Science Explorations Summer Camps (SciX) in the Faculty of Science has partnered with the Toronto Star Fresh Air Fund to subsidize campers’ fees. The Fresh Air Fund has generously donated $5,500, which will go towards covering fees for 20 children this year.

“Last year, our registrations grew by about 50 per cent — evidence that more kids than ever are excited about STEM,” said Almira Mun, assistant dean for Science Engagement Programs, “Parents want to keep curious minds enriched during the summer break but for kids it’s a way to make friends while having fun exploring STEM topics. There’s nothing better than seeing a child’s face light up after discovering something new or because their ‘hypotheses’ have been proven. We’re so grateful to the Toronto Star Fund for providing that experience to children who might not, otherwise, share in that excitement.”

SciX camps are week-long educational day programs in science, technology, engineering and mathematics (STEM) that run from July 4 to August 26 for kids in grades three to eight. For summer 2017 thus far, more than 530 kids have registered.

Campers investigate different topics in STEM through engaging hands-on experiments. Highlights include camps focused on computer programming or astronomy, as well as the extremely popular mini med-school, among others. There are also camps just for girls, including one called Global Problem Solvers, where girls apply science, technology, engineering, and math to design systems that will help solve current world issues.

All of the SciX camps foster problem solving, critical thinking and an overall passion for STEM – and they are well received by kids and parents alike. “My daughter was thrilled to learn more about computers,” said one parent. “It gave her a new sense of confidence to sit down and compose a game that she could then play. I was blown away by the ‘work’ notes she brought home, and by her enthusiasm for learning something during the holidays. ‘It’s like school in the summer, but way more interesting!’ she said.”

The Toronto Star Fresh Air Fund is a children’s charity that provides grants to camp organizations to subsidize fees for underprivileged and special needs children from the Toronto area each summer. The Fresh Air Fund has been a proud supporter of camps at York University for 20 years, providing close to $50,000 in subsidies for campers taking part of camps such as York Youth Connection and the Science Exploration Camps.