For the second time in a row, Schulich School of Business can claim the bragging rights as the NSSE Champion Cup winner.

NSSE, or “Nessie”, is the National Survey of Student Engagement that seeks input from first- and fourth-year York University students. Through NSSE, students are able to contribute their insight and have input into York University’s future direction. The online survey ran Feb. 6 to March 31. 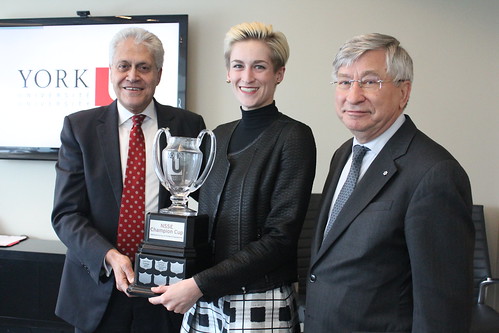 Organizers at York U challenged individual Faculties (except the Faculty of Education and Osgoode Hall Law School) to encourage participation in the survey. The Faculty with the highest participation rate wins the NSSE Champion Cup and bragging rights until the next survey.

President and Vice-Chancellor Mamdouh Shoukri was present to hand out the awards and shared a few thoughts on the importance of student input.

The survey plays a crucial role in steering the University toward a “better learning environment,” he said. He also noted the importance of student opinion with respect to government priorities in post-secondary education, such as funding.

Quick facts about this year’s NSSE:

The online survey, which takes about 15 minutes to complete, allows students in their first and final years of a four-year degree to offer their insight into what York U does well and what it could improve. It will be used to determine how much time and effort students put into educationally rewarding activities and to what degree York University facilitates this involvement.