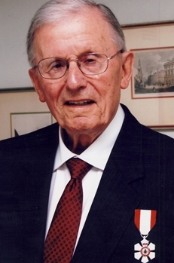 Professor Emeritus Bernard Russell Blishen died on Feb. 8 with his family at his side. Prof. Blishen was in his 98th year. He was predeceased by his wife Ruth.

Prof. Blishen was a professor of sociology in the former Faculty of Arts (now the Faculty of Liberal Arts & Professional Studies) at York University. He retired from teaching in 1989. From 1974 to 78, he was the director of the Institute for Behavioural Research at York University. He served as a professor of sociology, in the Department of Sociology from 1974 to 89.

“Perhaps an interesting memory regarding Bernard is that he was a ‘test case’ for the Supreme Court challenge to mandatory retirement at 65 [years of age] that was in place in 2002,” recalls his colleague James Moore.

In 2011, he was honoured with the Order of Canada for his work as a sociologist.

Prof. Blishen is best known for developing the socio-economic index known as the Blishen Scale. He was also the research director of the Royal Commission on Health Services that, in 1964, provided a plan for the national Medicare program. He later played a key role in the development of the sociology of medicine. For more on his life, visit http://bit.ly/2mx5FOp.

A funeral service has taken place. As an expression of sympathy, donations to cancer research would be appreciated.