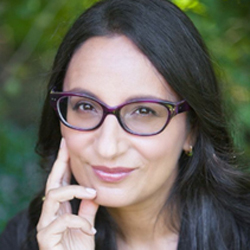 On Feb. 14, Madhur Anand visited York University to talk about her book of poems, New Index for Predicting Catastrophe (2015) for the Canadian Writers in Person Series.

Anand said to the audience gathered at York: “In my writing, I want to convey some scientific facts and truths, but I also want to convey my experience.” Her poems draw on the scientific language that she is familiar with to reflect on her experience of being in the world.

The collection includes 13 poems based on 13 scientific articles that Anand is co-author of. These “Found Poems” use exclusively words that Anand takes from those scientific articles, but reflect on different experiences, underlining the ways in which language can convey hard facts and lyrical sentiment, depending on how we use it.

The writer has compared the constraints of a scientific article to those of a poem: they each have their own rules. Most of the poems in this collection, Anand pointed out, work within some kind of constraint (13-syllable lines, or more elaborate poem patterns like the villanelle) because she is interested in “the use of constraint to convey something very complex.”

Anand completed her PhD in theoretical ecology at Western University and is currently a professor in the School of Environmental Sciences at the University of Guelph. In her talk, she said, “There are two things that I have revered throughout my life and found very beautiful: mathematics and poetry.”

The publisher McClelland & Stewart describes her collection of poems as “A striking poetic debut that brilliantly illuminates and celebrates the intersection of poetry and science and the ways they can mediate our discovery of the world and our place in it.”

Readings in the Canadian Writers in Person series are free and open to any member of the public. For more information, contact Professor Leslie Sanders at leslie@yorku.ca or Professor Gail Vanstone at gailv@yorku.ca. All readings are held Tuesdays from 7 to 9pm in 206 Accolade West Building, Keele campus.